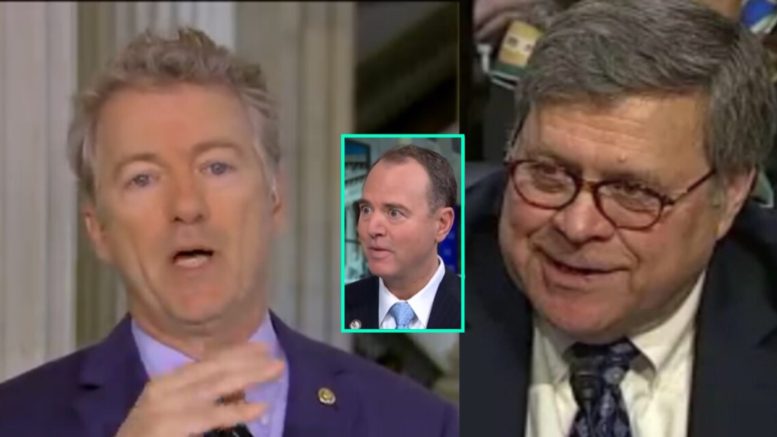 Fox News reported in a four-page letter to the leaders of the House and Senate Judiciary committees, Attorney General William Barr wrote that Mueller, a former FBI director, “did not find that the Trump campaign, or anyone associated with it, conspired or coordinated with the Russian government” or Russia-linked organizations in either “disinformation and social media operations” or “computer hacking operations designed to gather and disseminate information to influence the [2016] election.”

President Trump said after the Mueller report came out that he has been completely exonerated.

Asked if he agrees with the President’s statement, Sen. Rand Paul said, “Absolutely. I think this is a good day for America, if we’re going to get beyond all of this.”

He went on to explain that he believes it was a “partisan witch hunt” from the beginning, reiterating that the President has been exonerated.

Rand suggested, “I think the Democrats and some in the left-wing media, that promoted this, need to apologize to the country. And they need to try and be more objective in their reporting and not create some kind of narrative that somehow President Trump is a Russian spy, which was ridiculous, but also, insulting.” (Video Below)

Cavuto said that Democrats want to see the report so they can conclude for themselves, moreover so they can see if there is “obstruction of justice.”

Rand laid it out simply: “I think you can’t obstruct justice when there wasn’t a crime. [Emphasized]

“How do you cover up for a crime that didn’t occur? If President Trump and nobody in his campaign colluded with Russia, which was the accusation, if they didn’t do that, how can they be covering up for something they didn’t do?” He asked. (Video Below)

Sen. Paul painted a picture describe it more clearly. “It’s sort of like somebody stole some groceries in New York today. Are you guilty of it Neil? Do you have to prove that you’re not guilty, or should the government have to prove you’re guilty?” The Kentucky Senator asked.

“It sort of turns it on it’s head that ‘oh, the President needs to prove he didn’t obstruct justice.’ No, that it’s the government’s job, and they have a burden to prove it. They couldn’t prove it, but there also is no crime, so you can’t obstruct a crime that didn’t happen.” He concluded.