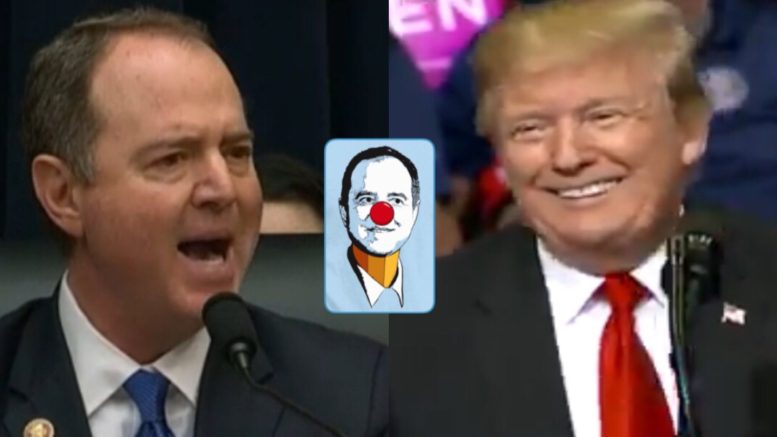 President Trump strikes again! The Commander in Chief is the ultimate troll master, and this time he doubled down on House Intelligence Chairman, Adam Schiff (D-CA) after he continues to peddle Russian collusion conspiracies.

President Trump’s website is now selling “Pencil-Neck Adam Schiff” T-shirts, after he coined the new nickname at a rally in Michigan on Thursday.

The shirt, which is on sale for $28, shows Rep. Adam Schiff (D-Calif.) with a pencil for a neck as well as a clown nose.

Earlier this week, Schiff said he still believes evidence of collusion between the Trump campaign and Russia “undoubtedly” exists and can be found by his committee.

(Related: In A Jam-Packed MI Rally Speech, Pres Trump Seals The Deal On The ‘Russia Hoax’ For Good)

President Trump posted the shirt on facebook with a video of the shirt that displays “Pencil-Neck” and his eyes moving from side to side, along with a clown nose growing in size. (See Below)

Get your shirt [HERE]

We leave you with President Trump ripping “Pencil-Neck” Adam Schiff into shreds over the Mueller report:

(Related: Tennessee Reps Pair Up & Reveal Their Version Of The ‘Schiff Report’ In A Classic Skit For The Ages)