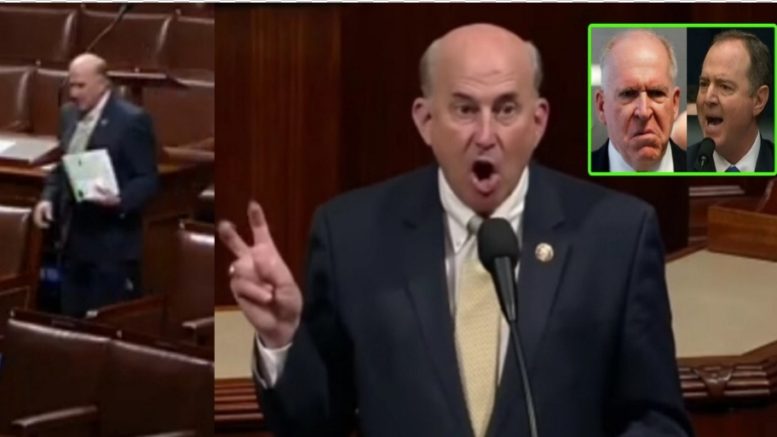 Representative Louie Gohmert (R-TX) spoke on the House floor Monday about the different abuses that have been seen within the intelligence community.

He also spoke about ex-CIA Director John Brennan and the spying of President Trump illegally, while citing Sen. Paul Rand (R-KY) who is demanding an investigation into former Obama officials who concocted the “anti-Trump Russia scandal.”

Brennan was one of the loudest and most virulent voices to trumpet the Russian collusion theory over the past two years, asserting falsely just weeks ago that Special Counsel Robert Mueller was likely planning to indict members of the Trump administration’s family in a scene reminiscent of the “ides of March” and the assassination of Julius Caesar, reported Fox News.

After the news that Robert Mueller found no evidence of Trump-Russia collusion, Brennan offered a meek acknowledgement of the error. “I don’t know if I received bad information, but I think I suspected there was more than there actually was,” Brennan told MSNBC’s “Morning Joe.”

Sen. Rand Paul wrote in a bombshell Twitter post last Wednesday that anti-Trump John Brennan “insisted that the unverified and fake Steele dossier” be included in a classified intelligence community report on Russian interference in the 2016 elections — a decision that ultimately lent credibility to the dossier and may have played a key role in fomenting unfounded fears of Russia collusion for two years.

He tweeted, “BREAKING: A high-level source tells me it was Brennan who insisted that the unverified and fake Steele dossier be included in the Intelligence Report… Brennan should be asked to testify under oath in Congress ASAP.” (Continued Below)

While speaking on the House floor, Rep. Gohmert pointed out that Christopher Steele, who fired from the FBI for leaking information to the media, and who wrote the Steele dossier– that particular information was never conveyed to the FISA court. This allowed the judge to keep signing warrants- to spy on the Trump campaign.

“We know Brennan has admitted being untruthful, under oath, before the Senate. He’s admitted perjuring himself when it suited what he wanted to accomplish. And this is a guy that was overrunning the Trump campaign? [He was] abusing his position as head of an intelligence agency.” Gohmert said.

Gohmert cited Sen. Rand Paul who said, “The the dossier was never considered true until it was recognized in intelligence assessments and only after the late John McCain and top Obama officials helped circulate it. The dossier was written by the Democratic National Committee and Hillary Clinton’s campaign. By indicating the Kremlin interfered in the election, it helped fuel false allegations into foreign collusion with the Trump campaign, leading to two years of non-stop investigations.” (Continued Below)

He continued reading Sen. Paul’s statement, “It’s becoming more clear that the Obama administration was able to obtain a FISA warrant to spy on our campaign based on a phony opposition research from the Clinton campaign having federal law enforcement spy on a Presidential campaign, based on phony campaign research is really distressing in the true untold story.”

Gohmert said, “that is a problem”, and then he announced bad news for Rep. Adam Schiff (D-CA), as he agreed with his colleagues in that Schiff should step down.

(Related: McCarthy Strikes The Chord In His Call For Schiff To Resign: ‘Does [He] Believe He Knows Something More Than Mueller?’)

“Over the last two years as he has continued to say ‘we know there was collusion between the Trump administration and Russia and we have evidence’– and on and on– his credibility when it comes to intelligence matters have now been done great harm. Not only here but abroad.” Gohmert said of Schiff.

“And so, I think it is time to have a different Chairman of Intelligence. It’s too important that we have someone who’s a chairman that hasn’t spent two years saying something was true, that it turned out wasn’t.” He added. (Videos Below)

He boldly stated, “If we don’t clamp down on what we see are clear abuses within the DOJ, within the intelligence community, with the FISA courts, then the abuses will allow the rising of a Chavez, of these people who got elected and turned totalitarian.”