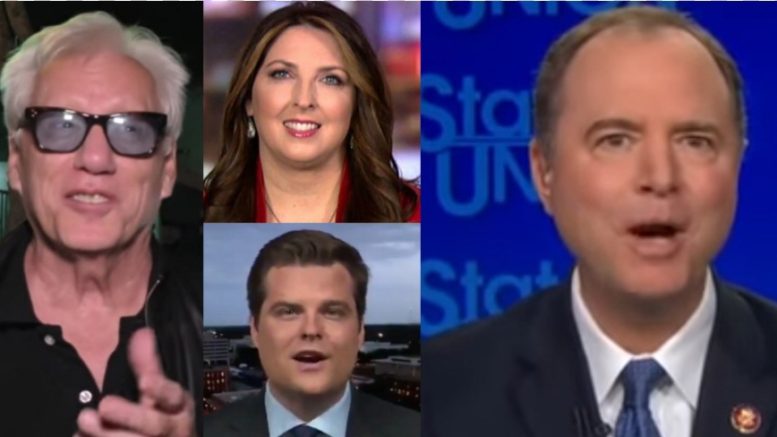 Tapper however, did a great job pressing Schiff on his “evidence of collusion” that he claims to have. Just kidding. That never happened as CNN allowed Schiff to peddle his narrative with zero facts.

Anti-Trumper Adam Schiff refused to back down from his delusional claims that the evidence of wrongdoing by President Trump “is in plain sight” and said he has “no regrets” calling out the President for what he believes is “deeply unethical and improper conduct.”

“I think there is a different standard here between the Republicans and the Democrats. The Republicans seem to think that as long as you can’t prove it’s a crime, all is fair in love and war… I don’t feel that way, I don’t think most Americans feel that way.”

This comes after Republicans have called on Schiff to step down from chair of the House Intelligence Committee for his repeated claims of collusion delusion between President Trump’s 2016 campaign and Russian operatives. (Continued Below)

As Fox News reported, in March 2017, Schiff told MSNBC that “there is more than circumstantial evidence now” of a relationship between Russia and Trump’s associates. In December of that year, Schiff said on CNN: “The Russians offered help, the campaign accepted help. The Russians gave help and the president made full use of that help. That is pretty damning, whether it is proof beyond a reasonable doubt of conspiracy or not.”

(Related: Trump Breaks His Silence On Special Counsel’s Report As Barr Releases Findings: ‘This Was An Illegal Takedown That Failed’)

Schiff remains committed to peddling his conspiracies while claiming that there is evidence of wrongdoing “in plain sight.” Perhaps he is clearly suffering from a full blown case of “Trump Derangement Syndrome.”

“I don’t regret calling out this president for what i consider deeply unethical and improper conduct and the moment we start to think that we should back away from exposing this kind of malfeasance and corruption is a dangerous point,” Schiff said.

He added, “There is a risk when you have an immoral president, a president who lacks in basic character who violates the norms of office. There is even a greater risk in doing too little oversight. I make no apologies for that and I’m going to continue holding this administration responsible.”

A few Republicans stepped up to call out Schiff on his claims of still having collusion evidence.

James Woods wonders, “Dang! How did Mueller using a gazillion subpoenas miss this!?”

Dang! How did Mueller using a gazillion subpoenas miss this!? https://t.co/mF6tSGDGLO

GOP Chairwoman Ronna McDaniel, expressed, “Adam Schiff is delusional. He says he doesn’t have any regrets, even after the Special Counsel investigation exonerated @realDonaldTrump. Schiff lied for two years and no one should take him seriously.”

He says he doesn't have any regrets, even after the Special Counsel investigation exonerated @realDonaldTrump.

Schiff lied for two years and no one should take him seriously.

Rep. Matt Gaetz (R-FL) said, “Democrats are dealing with the consequences of their own eroding credibility. There is no dispute as to the conclusion of the Mueller Report: there was no collusion.”

Democrats are dealing with the consequences of their own eroding credibility. There is no dispute as to the conclusion of the Mueller Report: there was no collusion. pic.twitter.com/kl3gccMKW0

Schiff on CNN State of the Union peddling his conspiracies: