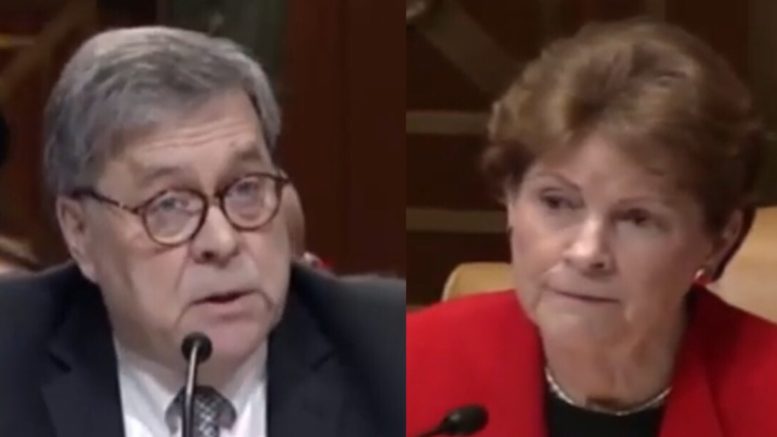 Barr believes “spying did occur” on the Trump campaign in 2016, and he vowed to review the conduct of the FBI’s original Russia probe — and the focus of a related internal review shifted to the role of a key FBI informant.

On Tuesday, Fox News reported that Attorney General William Barr had assembled a “team” to investigate the origins of the bureau’s counterintelligence investigation into the Trump campaign.

During the hearing Wednesday, Barr testified that he hasn’t technically “set up a team” but has colleagues helping him as he reviews the case.

Asked about by spying Barr announced, “I think spying did occur. The question is whether it was adequately predicated. I think it’s my obligation. Congress is usually very concerned with intelligence agencies and law enforcement agencies staying in their proper lane.” Barr also noted that “spying on a political campaign is a big deal.”

As reported by Fox News, the comments follow a new report that the Justice Department’s internal watchdog also is scrutinizing the role of an FBI informant who contacted members of the Trump campaign during the 2016 election, as part of a broader review of the early stages of the Russia investigation. The New York Times reported that Justice Department Inspector General Michael Horowitz is looking into informant Stefan Halper’s work during the Russia probe, as well as his work with the FBI prior to the start of that probe. (Continued Below)

“This is not launching an investigation of the FBI,” Barr stated. “Frankly, to the extent there were issues at the FBI, I do not view it as a problem of the FBI. I think it was probably a failure of the group of leaders—the upper echelons of the FBI. I think the FBI is an outstanding organization and I am very pleased Director Chris Wray is there.”

He added, “If it becomes necessary to look over former officials, I expect to rely on Chris and work with him. I have an obligation to make sure government power is not abused and I think that’s one of the principal roles of the attorney general.”

On Tuesday, Barr announced that he was reviewing the origins of the Russia investigation at the FBI and the Justice Department, amid mounting calls for scrutiny of the probe’s beginnings from Trump and prominent congressional Republicans. “More generally, I am reviewing the conduct of the investigation and trying to get my arms around all of the aspects of the counterintelligence investigation that was conducted in the summer of 2016,” Barr said. (Continued Below)

The day following Barr’s release of his summary of the Mueller report, Senate Judiciary Committee Chairman Lindsey Graham, R-S.C., said his panel also would investigate alleged FISA abuses at the start of the Russia investigation and called on Barr to appoint a new special counsel to investigate “the other side of the story.” Graham has been calling for a second special counsel since 2017 to investigate “whether or not a counterintelligence investigation was opened as a back door to spy on the Trump campaign,” per Fox News.

Also, House Intelligence Committee Ranking Member Devin Nunes (R-CA) said over the weekend he is going to send eight criminal referrals to the Justice Department this week regarding alleged misconduct by DOJ and FBI officials during the Trump-Russia investigation.

When asked Tuesday about Nunes’ referrals, Barr said he hasn’t seen them yet, but, “Obviously, if there is a predicate for investigation, it will be conducted.” (Video Below)

(Related: Barr Unveils The Next Step Once He Gets Criminal Referrals From Nunes: ‘If There’s A Predicate For An Investigation, It’ll Be Conducted’