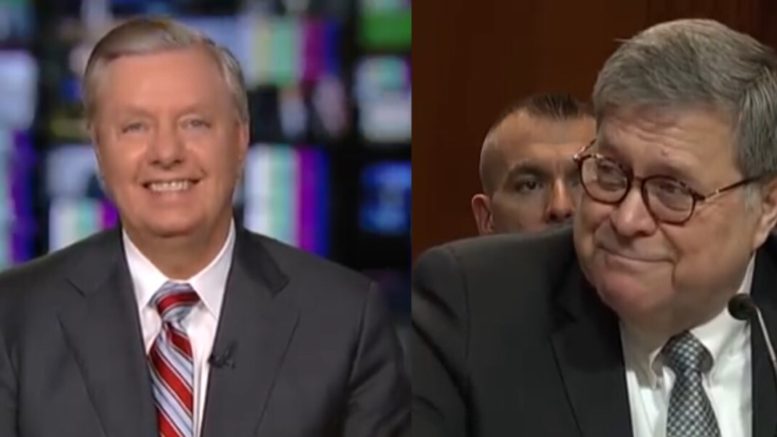 On Wednesday, Barr said he believes “spying did occur” on the Trump campaign in 2016, and he vowed to review the conduct of the FBI’s original Russia probe and the focus of a related internal review shifted to the role of a key FBI informant.

Sen. Graham has also vowed to get to the bottom of the “spying” and find out the origins of how it all got started.

“There’s no doubt there was spying going on Trump’s people and campaign, the question is: was it lawful?” The Senate Judiciary Chairman asked.

Graham explained that the Foreign Intelligence Surveillance Act (FISA) allows you to follow around people who think are working with a foreign government. He also noted that counterintelligence investigation by very definition is “surveilling people that you think are spying.”

Asked if it was lawful, Graham said, “If the warrant was based on the [Steele] dossier, that wasn’t lawful. And, I don’t know why they did not tell Trump about people on his campaign working with Russia if they really believed it.” (Continued Below)

Last year, Senators Graham and Chuck Grassley (R-IA) submitted a letter to Deputy Attorney General Rod Rosenstein and FBI Director Chris Wray requesting that they consider investigating Christopher Steele for lying to the FBI, which is a federal crime. Attached to that referral letter was an eight-page classified memorandum (“Grassley/Graham memo”) setting forth the basis for the referral.

Like the Nunes memo, the Senators’ letter contains allegations about how the FBI and Justice Department sought the FISA application of former Trump campaign foreign policy adviser Carter Page. They suggested that the Justice Department and FBI may have lied to FISA court about Steele’s credibility and the salacious dossier.

As reported by the Heritage Foundation, in their referral memorandum, Grassley and Graham, who have reviewed all four FISA applications in their entirety, “as well as numerous other FBI documents relating to Steele,” make statements which, assuming they are true, tend to support what is contained in the Nunes memo. (Continued Below)

Hannity pointed out that former FBI Director James Comey went to Trump Tower in 2017, and he told president-elect Trump that the dossier was not verified, but it’s salacious. “So did Comey lie to Trump then, or did he lie on the FISA application? Hannity asked. “But, he lied on one of those occasions.”

“If the dossier is unverified, which I believe, how could you use it to get a warrant against an American citizen four times? If you really believed Trump’s campaign was being infiltrated by Russians, why didn’t you tell him, so he could do something about it? And how could Clinton get away with all of this, and not have anything– no charges at all, when the average person would probably be in jail now.” Graham added, “I think it has to do a lot with a political bias.” (Continued Below)

Former FBI agent Andrew McCabe admitted if there was not a dossier, the original FISA warrant could not have been obtained by the FBI.

RCI further notes that in the days following Comey’s firing, McCabe quickly assembled his “Russia team” of investigators, led by Peter Strzok, who was accused of anti-Trump bias when he was later fired by the bureau. McCabe says his team recommended he order a full investigation of the president, which he says he approved on May 10.

On May 12, two days later, the FBI sought to reconnect with its old informant Steele.

McCabe testified that without the dossier, the original FISA warrant could not have been obtained by the FBI in October 2016. Bruce Ohr testified he first warned McCabe of Steele’s anti-Trump bias during an August 2016 meeting in the then-deputy director’s office. In British court papers, Steele himself confessed that his dossier was “unverifiable” and could never be used in a court of law. (Videos Below)