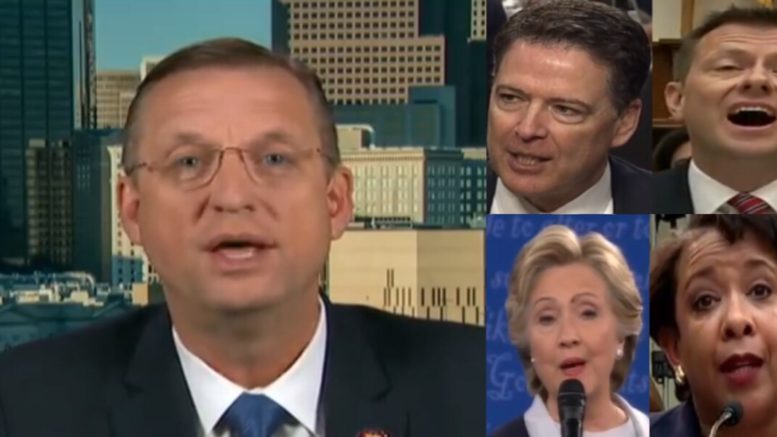 Ranking member of the House Judiciary Committee, Congressman Doug Collins (R-GA), joined Maria Bartiromo on Fox News’ “Sunday Morning Futures” where he weighed in on Attorney General William Barr, who is ready to look into the origins of the Russia investigation.

Barr told members of a Senate Appropriations Committee panel that he wants to understand how and why key decisions were made about the counterintelligence investigation opened by the FBI in the summer of 2016.

The attorney general said during his testimony that he is “putting a panel together” and that he believes “spying did occur”.

“I feel an obligation to make sure government power is not abused,” Barr said. “I think that is one of the principal roles of the attorney general.”

Rep. Collins has also made the move to get the truth to the American people as he has released transcripts from the closed door testimonies of various witnesses within the DOJ and FBI.

Asked what strikes him most, the takeaway from the transcripts that he’s released, Collins began, “It goes back to a certain group.” He listed off some of the key players who were involved in an effort to take down the President: Peter Strzok, Lisa Page, Andrew McCabe, Jim Baker, James Comey. (Continued Below)

“We go back to this really corrupt cabal that is involved in really everything. I think it’s really interesting when you have Baker actually saying in the transcripts that were released this past week where he thought originally that [Hillary] Clinton would have been indicted, that she would’ve been charged in this, but was actually talked out of it by [James] Comey and others.” Collins said.

Collins pointed out that we found out from Lisa Page’s transcript that they were being pressured by the DOJ and former Attorney General Loretta Lynch, who said to call it “matter” instead of “investigation”, referring to James Comey, where they let Hillary Clinton off the hook.

Asked how far up the Obama ladder does it go knowing that now we see suggestions that it wasn’t just the cabal of people at the top of the FBI and DOJ, Collins responded, “We’re seeing more and more, and I’m glad to hear Chairman Graham and the Senate is going to be continuing to look into this. I’m glad to hear Bill Barr is saying we need to see the predicate of this. We need to know why this actually happened.”

“You do not need the Department of Justice in a position where the justice is being dispensed in a political fashion and not as a blind rule of law. Hearing the things out the State Department, seeing this previous administration, everything was politicized toward what they wanted to do and the spin that they wanted to give.” Collins said.

Collins suggested that a continued investigation needs to take place and Bill Barr said he is willing to look into it. “And in doing so, [Barr] drew the ire of Democrats who don’t want those things exposed. They don’t want the things that we’ve been talking about for a long time.” (Continued Below)

The Georgia Congressman also called out Lynch after her secret meeting with Bill Clinton.

“Anything they could do to play down this. It all goes back to a politicization which is worse, because it gets into our FISA court, our FISA applications. This is how we got our FISA courts because of the abuse of power from administration officials and folks back in the 70’s.” Collins concluded.