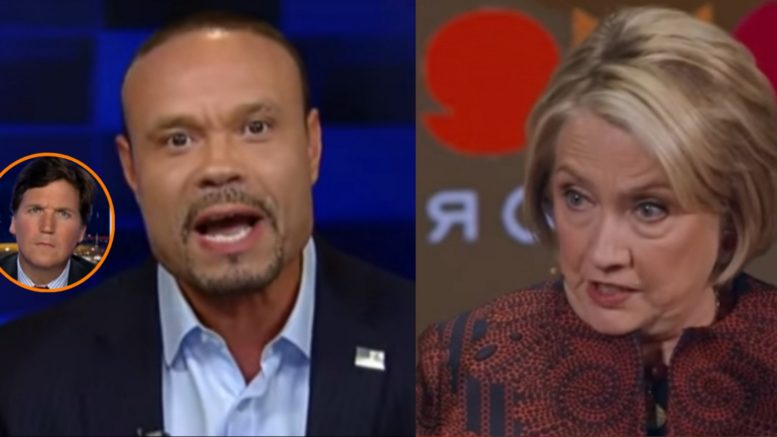 On Friday evening, Dan Bongino joined Tucker Carlson, where he gave his take on the Mueller Report.

Bongino’s primary concern involved what was NOT included in the report that grabbed his attention the most. As he broke it all down, he helped explain why Hillary Clinton has remained silent on the report.

Bongino said, “What he (Mueller) conveniently leaves out of it is that some of the people who made that Trump Tower meeting happen, the Russians, were, in fact, connected to Hillary Clinton through Fusion GPS, the company she paid, and personal relationships already acknowledged to the media.”

Bongino said he isn’t sure that Mueller was really investigating Russian collusion, and instead was really “writing an op-ed for thirty million dollars.”

When asked by Tucker if this all helps explain why we haven’t heard from Hillary on the Mueller Report, Bongino replied, “She has a lot to hide.”

He reiterated Clinton’s ties to two of the people who showed up for the Trump Tower meeting and their connection to Fusion GPS. Video Below

Bongino declared, “Nowhere in the Mueller Report are those relationships mentioned.”

Related Article: Sara Carter & Co. Confirm ‘Indictments’ That Are About To Hit Former Obama Officials: ‘It Will Be An Avalanche’

He concluded, “It’s basically a Jack Ryan story told to make you believe Trump colluded with the Russians so they can get a road map for impeachment. That’s what it is.” Video Below