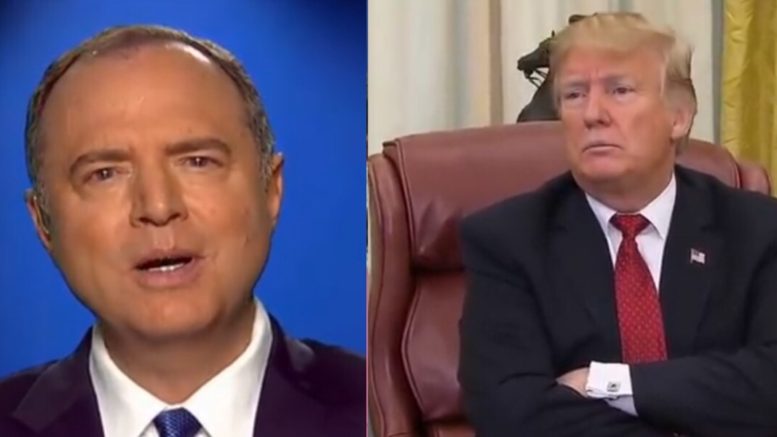 House Intelligence Committee Chair, Adam Schiff (D-CA), joined host Chris Wallace on “Fox News Sunday” where he weighed in on the aftermath of the Mueller report.

This comes after Jerry Nadler issued a subpoena for the full unredacted report, which is against the law. Further, Democrats are demanding Attorney General William Barr to testify, which he has already agreed to do in May.

During the interview, Rep. Adam Schiff explained his thoughts on why impeaching President Trump would be unsuccessful in spite of some radical Democrats still trying to pursue it.

“I think it’s a very difficult decision and we’re gonna have a caucus about this over the next couple weeks to try and figure out what the best course is– not for the party, but what’s the best course for the country,” Schiff explained.

He continued, “I think it’s certainly the case that an impeachment would be unsuccessful if the Republican party continues to place party above country, continues to essentially back the President– no matter how unethical or dishonest his conduct may be. And sadly, that’s where we are right now.”

He added, “So we will have to decide, do we nonetheless go through an impeachment because to do otherwise, would signal that somehow this President’s conduct is okay– that future President’s can engage in this kind of corruption without consequence. Or do we decide that we are better off doing the oversight through the context of oversight hearings by the various committees, rather than a formal impeachment.” (Continued Below)

He noted that it will be a very consequential decision and one that “he is going to reserve judgment on until he has a chance to fully deliberate about it.”

(Related: Kellyanne Conway Renews Attacks On Adam Schiff, Calls On Him To Resign: ‘He Ought To Put Up Or Shut Up!’)

Chris Wallace also pressed Schiff about his “evidence of collusion” and cited the Mueller report  explaining “the investigation did not establish that members of the Trump campaign conspired or coordinated with the Russian government in its election interference activities.” (Video Below)

Schiff responded, “The president and his allies repeat this mantra of no collusion they clearly haven’t read or ignoring the plain language of the report where Bob Mueller says two things. He says ‘we’re not going to look into the question of whether there’s collusion’.”

“That’s a common late-term that can be criminal or beyond criminal conduct. ‘We’re gonna look at the crime of conspiracy.’ And on that issue, Bob Mueller says something else that I’ve been saying frequently which is that fact that you may not be able to prove beyond a reasonable doubt of criminal conspiracy, doesn’t mean there’s an absence of evidence of a crime.” He added.

Schiff basically said his evidence is the Trump tower meeting. “What more clear intent to collude could you have that the Russians offering dirt on Hillary Clinton as part of what was described as an effort to help Mr. Trump and the campaign?”