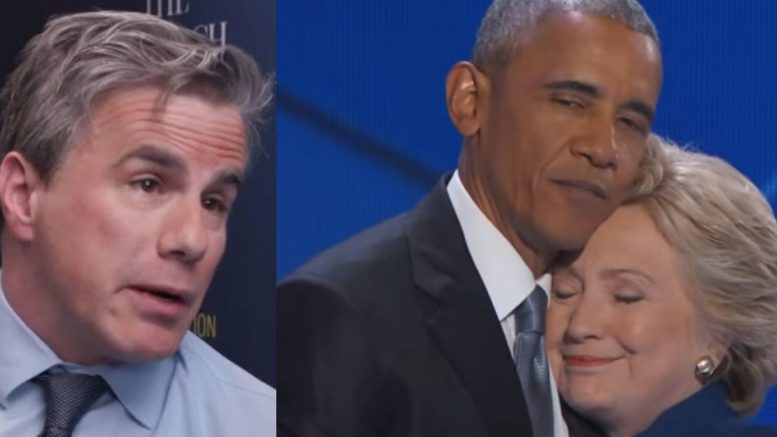 President of Judicial Watch, Tom Fitton, tweeted an update on the Clinton email scandal Tuesday along with dropping off a new press release.

In a new press release from Judicial Watch, they announced that a senior FBI official admitted, in writing and under oath, that the agency found Clinton email records in the Obama White House, specifically, the Executive Office of the President.

The FBI also admitted nearly 49,000 Clinton server emails were reviewed as a result of a search warrant for her material on the laptop of Anthony Weiner.

Tom Fitton said, “If you want to know why Hillary Clinton has skated thus far on her email misconduct, it’s because Barack Obama is implicated in the Clinton email scheme. The FBI just admitted to us that it had to find emails in Barack Obama’s White House, specifically the Executive Office of the President.”

“The FBI also confirmed it found up to 49,000 Clinton server emails on the laptop of the disgraced former congressman, Anthony Wiener. These disclosures were forced out of the FBI as a result of a court-ordered discovery granted to Judicial Watch into the Clinton email issue.” Fitton added. (Continued Below)

As Judicial Watch reported, E.W. (Bill) Priestap, assistant director of the FBI Counterintelligence Division, made the disclosure to Judicial Watch as part of court-ordered discovery into the Clinton email issue.

U.S District Court Judge Royce Lamberth ordered Obama administration senior State Department officials, lawyers, and Clinton aides, as well as Priestap, to be deposed or answer writer questions under oath. The court ruled that the Clinton email system was “one of the gravest modern offenses to government transparency.

The press release goes to state that Priestap was asked by Judicial Watch to identify representatives of Hillary Clinton, her former staff, and government agencies from which “email repositories were obtained.” Priestap responded with the following non-exhaustive list:

JW also reports that Priestap also testifies that 48,982 emails were reviewed as a result of a warrant for Clinton email account information from the laptop of Anthony Weiner, who had been married to top Clinton aide Huma Abedin.

A complete copy of Priestap’s interrogatory responses is available here. Priestap is serving as assistant director of the FBI’s counterintelligence division and helped oversee both the Clinton email and the 2016 presidential campaign investigations. Priestap testified in a separate lawsuit that Clinton was the subject of a grand jury investigation related to her BlackBerry email accounts, per JW.

“Once again, it’s Judicial Watch doing the heavy lifting to hold Hillary Clinton and Barack Obama accountable to the rule of law,” Fitton stated. (Video Below)

This astonishing confirmation, made under oath by the FBI, shows that the Obama FBI had to go to President Obama’s White House office to find emails that Hillary Clinton tried to destroy or hide from the American people. https://t.co/0Hv5fMdmQQ