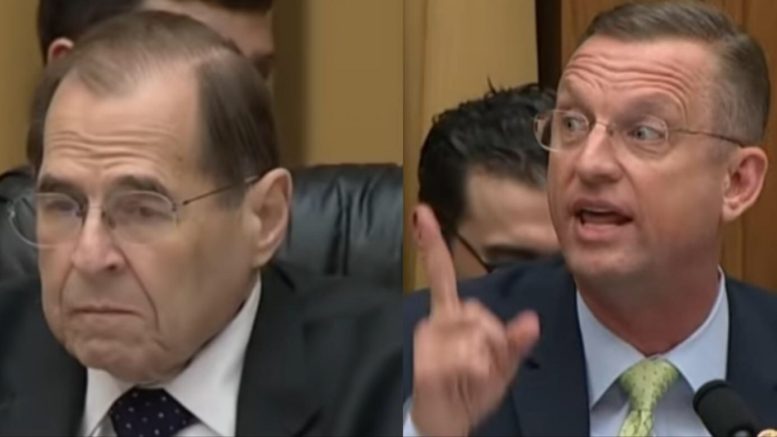 This comes after Nadler scheduled a Wednesday vote for “staff” members to question Bill Barr instead of using his own congressional committee.

Rep. Collins argued that Chairman Nadler took the ability away from Congress to hear from the Attorney General about the Mueller report, but also the American people and that it was a travesty.

“Yesterday, we found that he wanted staff to question the Attorney General because he calls the five minutes per member is not enough. But yet, we approved a motion yesterday that said we could do a whole extra hour between the Chairman and myself.” Collins said.

Collins also noted that the Chairman could’ve used any of his members of his the committee adding that some of the members are “excellent attorneys” on his side.

“Instead, we go back to a circus political stunt to say we want it to look like an impeachment hearing because they won’t bring impeachment proceedings. That’s the reason.” He expressed. (Continued Below)

“Take whatever you want to take. Go out and have press conferences and say whatever you want, but the reason Bill Barr is not here today is because the Democrats decided they didn’t want him today.” Collins continued while Nadler smugly sat listening in his chair.

The Georgia representative pushed back at Democrats who claimed the Attorney General was scared to show up adding that “the stunt and the circus continues over here!”

“We agreed to more time. We can talk about executive session but no, for some reason, for some purpose, except that optics of something they can’t do or don’t want to do right now, they wanted to have a staff member ask questions.” He added, “As I said before: if a staff member wants to ask questions that desperately, run for Congress! Put a pin on, find a committee.” (Continued Below)

Collins also pointed out the largest tragedy of it all and explained, “The Chairman just said we can’t let moments pass and I agree completely. Because what happened yesterday on this dais was a travesty.”

(Related: Rep. Collins RIPS Democrats At The Mueller Report Hearing: ‘[Nadler] Has Decided To Appear As If They’re Doing Impeachment’)

He explained that the Chairman would not recognize Republican members for valid motions, and blasted him for questioning their motives.

“The question I have here is not what is Bill Barr scared of. My question is what are the Democrats scared of? They don’t want Bill Barr here today. They’ve had the report, they’ve read it, they don’t like what’s in it. The Chairman won’t even go look at what the Attorney General offered him. It’s pretty amazing to me that he wants to go to exective session and ask questions about it, but he won’t even go read it.” Collins said.

Collins further blasted Nadler for making excuses for not giving Republican members their opportunity to ask questions or to make motions. “That’s not how this committee works!” He declared. “But when we [degrade] members of my side calling [an] amendment ridiculous [or] calling it dilatory– that is just wrong and it should offend everybody on this dais. Mr. Chairman this is wrong! (Video Below)