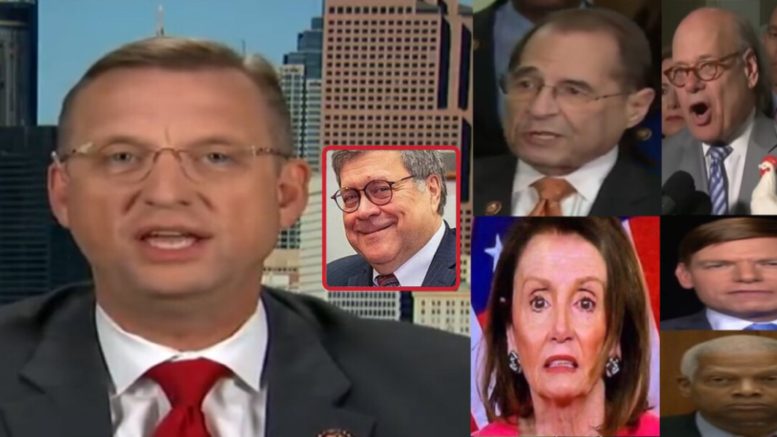 Ranking member of the House Judiciary Committee, Congressman Doug Collins (R-GA), interviewed with host Harris Faulkner on Fox News’ “Outnumbered Overtime” Monday where he weighed in on Democrats moving to hold the Attorney General in contempt.

House Democrats have drafted a contempt of Congress citation designed to “punish” William Barr for declining to appear before the House Judiciary Committee last Thursday, despite a subpoena requiring Barr to testify.

Politico reports that the House Judiciary panel has already completed the document, designed to force Barr to comply with their order to appear in front of the committee to testify about his role in receiving and handling Special Counsel Robert Mueller’s final report on whether the Trump campaign colluded with Russian officials to impact the outcome of the 2016 presidential election.

The lengthy draft document, available on Politico’s website, focuses far more on the Democrats’ reasons for wanting an unredacted copy of the Mueller report than it does on Barr’s refusal to comply with the Democrats’ subpoena. It also clearly documents a series of negotiations between the two parties, which ultimately failed when Barr refused to be questioned by the Democrats’ hand-selected, third party attorneys rather than by members of the House Judiciary Committee, reported Daily Wire.

In a statement, Judiciary Committee Chairman Rep. Jerry Nadler (D-NY) said, “The attorney general’s failure to comply with our subpoena, after extensive accommodation efforts, leaves us no choice but to initiate contempt proceedings in order to enforce the subpoena and access the full, unredacted report.”

The Department of Justice responded to Nadler’s opening contempt proceedings against Barr by inviting the chairman to negotiate on Wednesday. (Continued Below)

“We are prepared to discuss the matters raised in your letter, including your request to provide greater access to the less-redacted version of the report to additional Members of Congress and staff, as well as prioritizing review and possible disclosure of certain materials cited in the Special Counsel’s report, provided that such access and disclosure is done lawfully and in a manner that protects long-established Executive Branch confidentiality interests,” Assistant Attorney General Stephen Boyd wrote in a letter to Nadler Monday.

“To that end, we invite members of your and the Ranking Member’s staff to the Department on the afternoon of Wednesday, May 8, 2019, to negotiate an accommodation that meets the legitimate interests of our co-equal branches of government,” he added.

Rep. Doug Collins the ranking member on the Judiciary Committee, confirmed that he would be in attendance. (Continued Below)

Collins said on Fox News Monday, “Robert Mueller is going to testify to exactly what was in the report. If my Democratic colleagues would have cared to read the [Mueller] report, they will find there was no collusion, no charge of obstruction and that’s what the special counsel will testify to.”

He added that’s it’s amazing how quickly Democrats want to go down a path that they know they can’t go on, simply to have press releases and throw dirt at President Trump because they don’t like him.

“The Democrats are simply going after the President because he’s doing a good job. There’s nothing to impeach here. There’s nothing to bring any further investigations about. At the end of the day, it is them simply chasing after an election they lost in November 2016,” Collins said.

“Democrats have launched a proxy war smearing the attorney general when their anger actually lies with the president and the special counsel, who found neither conspiracy nor obstruction,” he wrote.

Democrats have launched a proxy war smearing the attorney general when their anger actually lies with the president and the special counsel, who found neither conspiracy nor obstruction. Full statement below → pic.twitter.com/BgCWMqRJW4

“I appreciate the respect Attorney General Barr is showing our committee by responding to a deluge of perverse demands. So far, he has honored Congress by being faithful to the laws we have enacted, and I look forward to a productive, bipartisan meeting this Wednesday,” Collins said with the attached letter from the DOJ.

I appreciate the respect Attorney General Barr is showing our committee by responding to a deluge of perverse demands. So far, he has honored Congress by being faithful to the laws we have enacted, and I look forward to a productive, bipartisan meeting this Wednesday. pic.twitter.com/lKdQHkvGBU