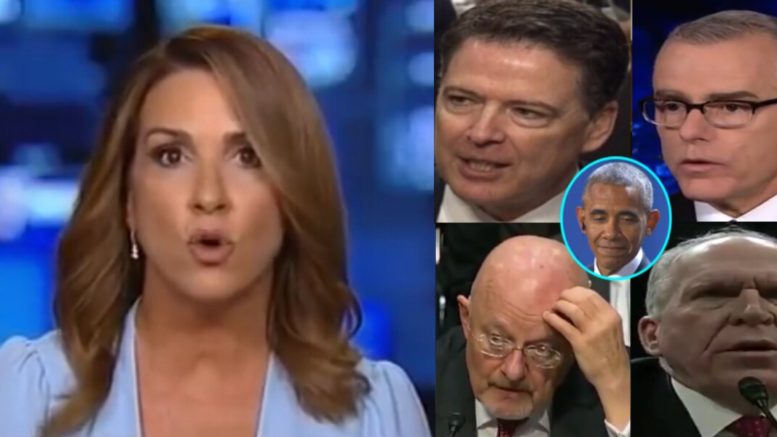 Monday evening on Fox News, investigative reporter Sara A. Carter and legal analyst Gregg Jarrett joined host Sean Hannity where they weighed in on deep state desperation, Obama officials’ “alleged abuse of power” and the media who are involved.

Further, they discussed the attacks against the Attorney General as he has vowed to “investigate the investigators.”

Gregg Jarret explained that after the release of the Mueller report, Attorney General William Barr is now the Democrats new “villain” as designed by Robert Mueller. “He left these little obstruction ‘crumbs’ for people in Congress, who are determined to undo the presidential election and remove Trump,” he said.

“He implied obstruction where none exists. If you read his report studiously, you will see that for every negative there is a countervailing positive. [Mueller] knew there was no obstruction of justice, but he couldn’t bring himself to say it. So he decided, I’ll let Barr say it– he’ll be the villain and they’ll use [Mueller’s] report as a pretext for impeachment,” Jarrett added.

Asked about FISA abuse, Hillary Clintons’ coverups and the abuse of power, Sara Carter said that it’s now all on the table.

“Now what Barr has to do and what John Huber is going to do, I’m sure, is look at the expansiveness of what happened here during this investigation. They’re going to want to take a closer look at John Brennan’s role in this. The CIA– how that played into Asra Turk, for example, who was dealing with George Papadopolus,” Carter began. (Continued Below)

Carter went on to say, “I think what’s going to be essential here that they gather all the communications and emails between Brennan and Clapper and others. If those are classified then they can review them in private.”

She further pointed out that they need to get the text messages from Andrew McCabe, which Judicial Watch has sued for, has been waiting for and fighting for. “Those are going to reveal an enormous amount of information. They need to get a hold of all of these texts and emails and find out how expansive this investigation was,” she explained.

“It didn’t just involve around Trump and those in his campaign. I think when they take a good hard look at this, they’re going to find out the abuse of power extended years before, and they were utilizing and weaponizing the intelligence community to investigate people that they considered enemies. And if that is the case, this is the biggest scandal in the United States intelligence community that has ever existed,” Carter suggested. [Emphasized] (Continued Below)

Jarrett wants to know when did Robert Mueller first realize that the evidence didn’t support collusion. “Wasn’t it a year ago? Why did [Mueller] disable this presidency to some extent and put the nation through the trauma of the collusion hoax?” He asked.

He suggested that Mueller will have some explaining to do. “Why didn’t he look into Hillary Clinton paying for the dossier– paying Russians?” Jarrett inquired.

(Related: Geraldo Responds As Report Claims Mueller Knew For A Year There Was No Collusion: ‘Were They Trying To Entrap The President?’)

Carter concluded that there is going to be an avalanche of information coming. “The only way for any of this to be rectified is for the Attorney General Barr to have his say, to be able to investigate this and to move on from the Russia conspiracy hoax theory– and to move on to what was really happening. And that was an investigation and weaponization of the intelligence community into the President to unseat a duly elected President of the United States,” she stated.  (Video Below)

Hannity agreed and added, “Notice they are clinging to their lie and their own conspiracy theory and they have no idea. The media and Democrats are gonna be hit so hard with that avalanche that literally, their newsrooms will shaking to its foundation that they’re not going to be able to handle it. And the mass sycosis continues.”