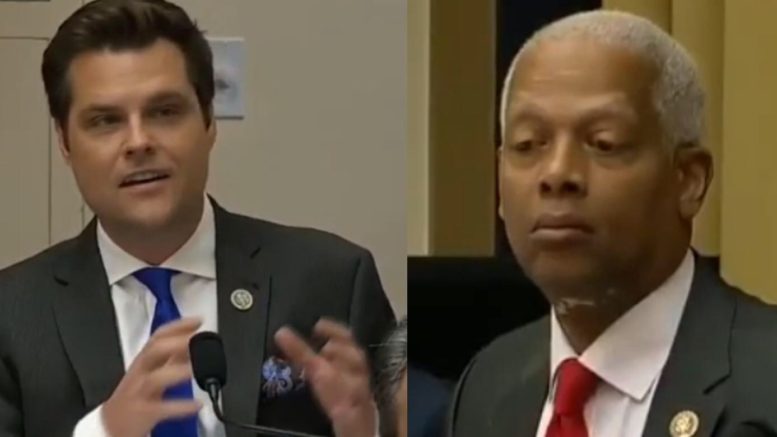 Rep. Nadler scheduled the congressional contempt vote on Wednesday. All Democrats that were present voted to hold William Barr in contempt of Congress in the contempt resolution. The measure will move to the full House for a vote later this month.

Congressman Matt Gaetz (R-FL) on Wednesday, however, called out Democrats for their underlying strategy behind hold the Attorney General in contempt.

He began, by first sarcastically thanking the Chairman for the opportunity to speak, as last week Rep. Nadler cut off his microphone when members sparred over Attorney General William Barr’s decision to not attend after Democrats insisted committee lawyers be allowed to question him. (Continued Below)

Rep. Hank Johnson (D-GA), who gave away the Democrats’ agenda away said on Wednesday, “It is up to this committee to ensure that we get that report because we have lawful responsibilities, constitutional responsibilities to engage in, one of which is possibly impeachment. How can we impeach without getting the documents?”

After Johnson’s public confession, Gaetz let everyone know in his opening for those who missed it, exactly what Johnson disclosed. “My good friend from Georgia just asked the operative question: ‘How can we impeach if we don’t get the documents?” He added, “Ladies and Gentleman, this hearing is not about the Attorney General, it’s not about the Mueller report. This is all about impeaching the President.” [Emphasized]

“Why don’t they just say it? Why don’t they just jump to the impeachment proceedings like their liberal media overlords are telling them to do?” He asked before revealing the reason why they won’t go forward with it. (Continued Below)

Gaetz explained the reason Democrats are not going forward with “impeachment proceedings” and that is because the American people don’t support it. “It’s easy to understand why; they actually went and elected Donald Trump [as] President of the United States. I don’t think people are going to support impeaching a President who is doing so well,” he said.

“At a time when my Democratic colleagues are focused on the ‘next election’ and ‘not solutions’ to the problems facing Americans, they can’t attack the President’s policies, because people are doing well. So typically, they roll next to identity politics– that’s based on what you look like, who you pray to, or who you love– you can’t possibly support Republicans,” the Florida Congressman suggested.

Gaetz went on to point out that a month ago he laid out the stages of grief that Democrats are going through. “Denial, anger, bargaining, depression, and acceptance,” he said.

“And with this whole kerfluffle of anger, we now know the third step: bargaining,” he continued. “Well Mr. Attorney General, you’ve given us 92% of the Mueller report, but we have to bargain for the remaining 8% because that’s really where we think the action is.” (Continued Below)

Gaetz then pointed out the next stage of the Democrats’ sign of grief and said that it’s not a good sign because it’s “depression.”

He listed off ideas that Democrats have which could possibly get passed, but they are not as Gaetz pointed out, “And by the way, I bet a bunch of my friends on the other side of the aisle, low key wish that their actual bills, that would impact the lives of Americans would get heard, instead of this garbage!”

He concluded, “The Obama administration ran an intel operation against the Trump campaign. Peter Strzok opened it up, the dossier kept it going, and now, the Democrats need to get over it!” [Emphasized.] (Video Below)

(Related: Collins SLAMS Nadler Over His Move To Hold Barr In Contempt: ‘Mr. Chairman, It Did Not Have To Be This Way’)