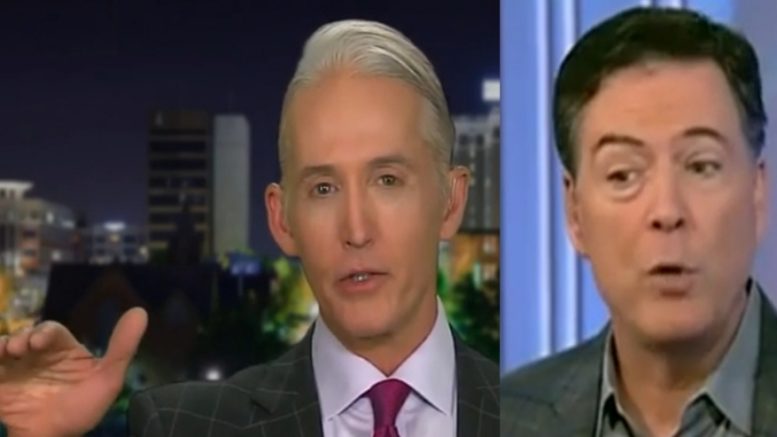 Comey tried to justify the effort to spy on President Trump’s 2016 campaign and even went as far to call it a “totally normal” process and “reasonable”.

When pressed on what he thought about Comey’s remarks, Gowdy initially stated, “Saint James Comey, pretty much the same as every other interview–He’s always right. He gets to write the moral script.”

He added, “If you deviate from that. If you’re Rod Rosenstein, then you lack character. If you’re somebody else, your soul’s been eaten.”

Gowdy recalled the time when he questioned Comey about the genesis of the Russian investigation. Comey claimed that he didn’t know Peter Strzok started it nor that he read the initiation document. Gowdy slammed Comey for refusing to think that any of his decisions should be re-looked at.

Chaffetz then brought up how Comey does not agree with the term “spying” being used to describe what happened to the Trump campaign and that he thought it was “totally normal” to inject someone in the campaign during the election cycle. Video Below

He challenged Comey to answer what exactly his factual predicate was to open an investigation into President Trump’s campaigncare, and why he chose someone, such as Peter Strzok, to lead it.

Gowdy went on to remind viewers, “If Rod Rosenstein had not fired him, he would still be the FBI Director. The guy who talks about souls being eaten and the guy who says everybody else lacks character–he’d still be on an airforce jet, sipping wine, crossing the country had he not been fired.” Video Below