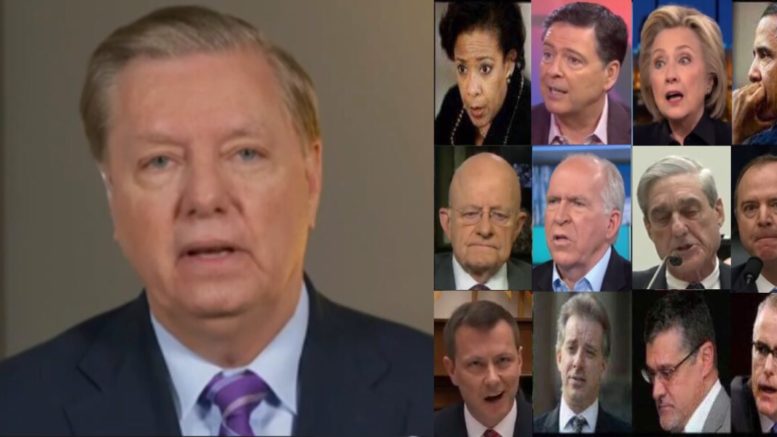 Senate Judiciary Chairman, Lindsey Graham (R-SC) joined host Maria Bartiromo on Fox News’ “Sunday Morning Futures” where he discussed the bombshell revelations that recently surfaced surrounding Christopher Steele’s dossier, as well as his plans to find out if there was anti-Trump bias in the conduct of the Russia probe investigators.

Graham has vowed to get to the bottom of how it all started. Further, he has called on the Justice Department to appoint a special counsel to investigate the DOJ’s misconduct in the handling of the investigation into 2016 Hillary Clinton’s email use and the Carter Page Foreign Intelligence Surveillance Act applications (FISA).

Senator Graham said that he is working to declassify a sensitive “document” that definitively proves that authorities knew the Steele dossier — which the FBI used to justify the secret surveillance of a former Trump aide — lacked any substantial independent corroboration.

“There’s a document that’s classified that I’m gonna try to get unclassified that takes the dossier — all the pages of it — and it has verification to one side,” Graham said. “There really is no verification, other than media reports that were generated by reporters that received the dossier.”

Graham added, “So, the bottom line is the dossier has never been independently confirmed. It was used to get a warrant.  They knew the author of the dossier was on the Democrat Party payroll. He hated Trump; they got the warrant anyway. Most Americans should be very upset about that. I’m very upset about it. And we’re going to get to the bottom of it.”

Instead, the FBI suggested to the court, the September 2016 article by Michael Isikoff was independent corroboration of the salacious, unverified allegations against Trump in the infamous Steele Dossier. Federal authorities used both the Steele Dossier and Yahoo News article to convince the FISA court to authorize a surveillance warrant for Page, per Fox News.

President Trump has vowed he will declassify the FISA applications, Gang of Eight material, and 302s. “Yes, everything is going to be declassified and more, much more than what you mentioned,” he said during an interview with host Sean Hannity.

The South Carolina Senator also indicated that after the completion of Inspector General Michael Horowitz’s own investigation into alleged FBI and DOJ misconduct during the 2016 presidential campaign, he would dig deeper. “I’m waiting for Horowitz to get his report done,” Graham said. “But we had a pretty big bombshell this week.” (Continued Below)

Graham specifically cited the report from The Hill’s John Solomon that the FBI was expressly told that Steele, the bureau’s confidential informant, had admitted to a contact at the State Department that he was “keen” to leak his discredited dossier for purposes of influencing the 2016 election. Steele also acknowledged that his dossier was funded by the Democratic National Committee (DNC) and Hillary Clinton campaign, per Fox News.

“Christopher Steele was trying to leak it to everybody,” Graham said.

Deputy Assistant Secretary of State Kathleen Kavalec’s handwritten notes detail her Oct. 11, 2016, meeting with Steele and it was apparently sent to the FBI, according to records revealed in a transparency lawsuit by Citizens United. However, the FBI included claims in Steele’s dossier in its successful FISA warrant application to monitor Page.

Graham said, “But-for the dossier, there would be no warrant against Carter Page. The meeting on Oct. 11 was 10 days before the FISA warrant application. So the FBI was on notice that their confidential informant went to the Department of State to urge the Department of State to take the dossier and leak it to the public to affect the election. That’s about as sick as it gets.” [Emphasized]

The application did not mention that the dossier had been funded by the DNC and Hillary Clinton campaign, nor did the application mention that Steele had admitted to wanting the claims in his dossier to go public before Election Day, or that he was desperate to “stop Trump.” (Continued Below)

In letters last week, Republican senators, including Graham, demanded answers from the State Department, as well as all related documents.

Asked why Democrats wouldn’t be upset about all of this, Graham responded, “Democrats want an outcome. Two years, 19 lawyers, 40 FBI agents, 25 million dollars to look at all things Trump. Mueller issues his report. They say before he was picked he’s the best possible guy in the world to do this. Once Mueller gives an outcome they don’t like, they want to take Mueller’s work product and politicize it. They just want an outcome.”