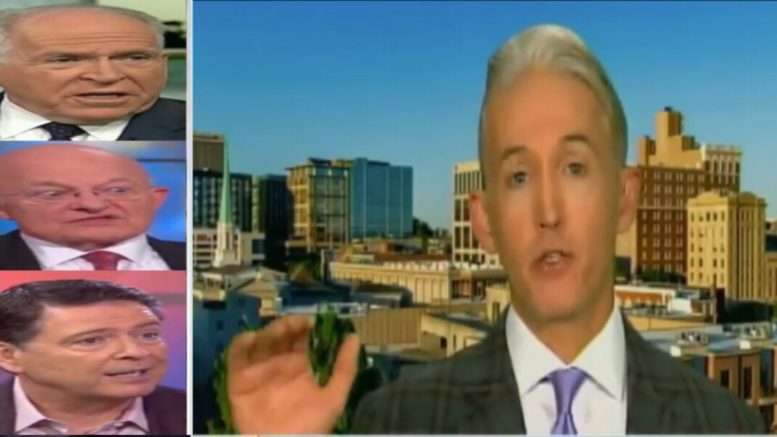 This comes after Barr provided new details about the recently announced probe into the origins of the Russia investigation, defending his decision to pursue it and stressing that many of the answers he’s gotten so far have been “inadequate.”

In an interview that aired Friday on Fox News, the Attorney General said he couldn’t name a date when Mueller didn’t know when there was no collusion but added that, “I’ve been trying to get answers to questions and I found that a lot of the answers have been inadequate. And, I’ve also found that some of the explanations I’ve gotten, ‘don’t hang together’.”

Barr continued, “So, in a sense, I have more questions today than when I first started.”

Trey Gowdy asked, “There’s a lot of serious questions that need to be asked. When did the Russian probe begin? When did it become hopelessly co-mingled with the Trump campaign? What was the factual predicate? Where are the transcripts, if any exists between the informants and the telephone calls to George Papadopoulos? Why the defensive briefing so inadequate of President Trump? Why didn’t they do a follow-up defensive briefing?”

He added, “That doesn’t even get to the whole FISA abuse in the fall. That’s just the spring and summer of 2016. There are lots of questions and I hope Bill Barr finds someone who is skilled enough to answer them.” (Continued Below)

Maria Bartiromo said she was glad that Gowdy brought that up and asked, “When the FBI agent sends in informants to someone they’re looking at, typically those conversations are recorded, right? Those people are wired.”

Gowdy continued, “There is some information in these transcripts that has the potential to be a game changer if it’s ever made public. If you have exculpatory information and you don’t share it with the court, that ain’t good. I’ve seen it, Johnny [Ratcliffe] has seen it. I’d love for your viewers to see it.” [Emphasized] (Continued Below)

Switching gears to the Steele dossier, Gowdy said, “People use the word ‘dossier’ and it has such an official sound to it. Let’s just call it for what it is: it’s a series of rank hearsay compilations put together by an FBI source, who was later defraught– paid for by the DNC. We can call it a dossier, it sounds official–It’s really something the National Enquirer would blush if they print it.”

Gowdy added, “So there is information that exists in December of 2016 and I hope anyone who has access to it, Senator Burr, Devin [Nunes], whoever is open minded, go look at that and I think it will help you understand whether or not that dossier, that unverified hearsay, was used for five times or just four times by the United States government. It’s pretty bad if it was used four times. It’s really bad if it was used five times!” (Video Below)