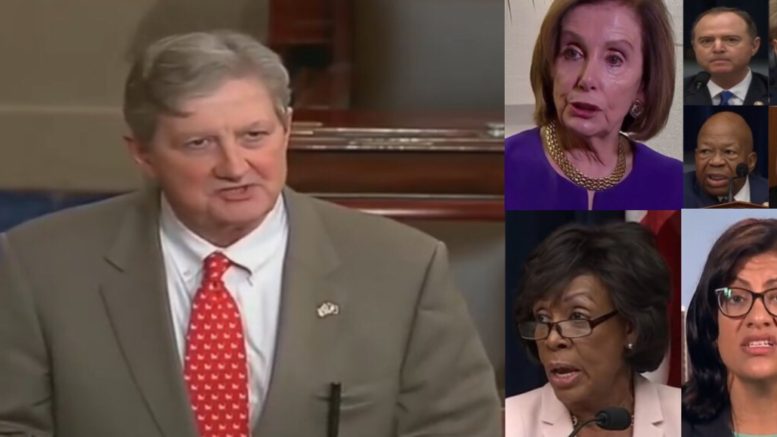 In a fiery speech on the Senate floor Wednesday, Sen. John Kennedy (R-LA), slammed House Democrats who have been toying with the idea of impeachment.

This comes as Democrats are engaging full speed ahead, throwing around the “I” word tirelessly and even went as far to hold a “secret meeting” on Wednesday after the Trump administration continues to push back at their phony investigations and subpoenas.

Sen. Kennedy had a direct message for his Democrat colleagues who continue in their efforts to attack the President, instead of pursuing legislation that could help Americans.

He dared Democrats to go on with it and recommended, “The House leadership needs to indict the President of the United States, impeach him, and let us hold a trial. He won’t be convicted. Or, they need to go ahead and hold in contempt every single member of the Trump administration, so we can move those issues into our court system and get back to doing the peoples business.”

However, Kennedy cautioned Democrats to be “very, very careful” if they decide to take the “court route” because once it enters the court system, it becomes a “zero-sum game.” (Continued Below)

If they move the issue to the court system, Kennedy clarified, “One or two things are going to happen: either the administration will win, in which case the oversight authority of the United States Congress will be undermined, or the House leadership will win.”

“In which case, no American with a brain above a single cell organism is gonna want to run for President of the United States!” He expressed. “Becuase they can find out… Congress will be able to find out everything about your life, even the most intimate details, whether it is relevant to your job or not, and whether it happened when you’re President or not.”

Kennedy went on to explain what he wants to happen. “What I hope happens, Mr. President, is that my friends in the House leadership and the administration sit down and talk,” he said. “Not talk like 8-year-olds in the back of a mini-van fighting, but talk constructively about how their behavior could impact important institutions in this country and work it out!” (Video Below)

Sen. Kennedy also addressed his colleagues in the Senate and urged them to do more for the American people, but acknowledged they have accomplished some.

He explained that the Senate has confirmed judges to the Federal Judiciary. “I’m not saying we’ve done nothing, I’m saying we need to do more.”

Sen. Kennedy explained more and said the people of America who care about impeachment “are the well-intentioned crank wanks,” but most Americans expect Congress to accomplish more.

(Related: Kennedy Fires Back After Brennan Says Mueller Report Has ‘Evidence’ Of Collusion & Obstruction: ‘[He] Needs To Take Off His Tin Hat’)