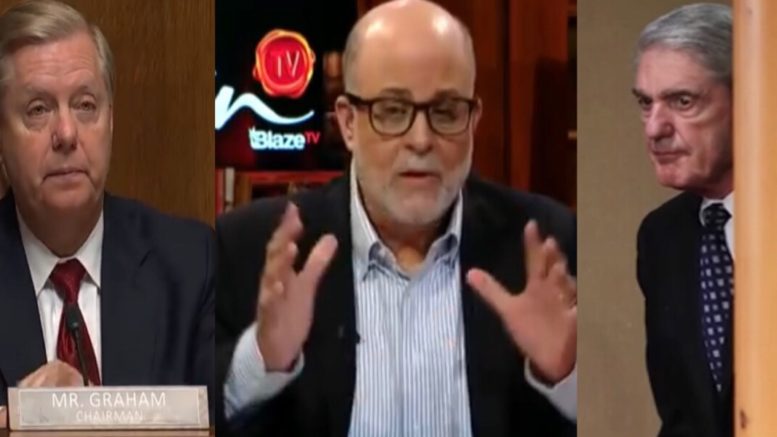 The host of “Life, Liberty, and Levin”, Mark Levin, joined “Fox & Friends” Friday morning where he pushed back at Robert Mueller after his Wednesday press conference.

Levin believes that the special counsel should be ordered to testify before the Senate Judiciary Committee, further labeling Mueller a “complete fraud.”

On Wednesday, Robert Mueller said that his report would serve as his testimony in regard to the conclusions of his investigation, which did not find that President Trump could be exonerated of obstruction of justice, but could not be indicted either.

Mark Levin pushed back and asked, “If Bob Mueller can say we can’t say the President didn’t commit a crime, I would say to Bob Mueller: I read your report, Volume 2. “Can you show me where in your report you say you had probable cause to indict a sitting president but because of those memos you couldn’t indict him? Can you show me where in your report where you say ‘here’s the evidence for a probable cause because of these memos we couldn’t indict him.”

He continued, “This guy is a complete fraud. And when he was standing there, I thought to myself… I know why you don’t want to go before Congress, you’re incapable of being grilled for 7,8,9 hours.

Then, Levin explained why he believes Jerry Nadler doesn’t want him to appear before the House Judiciary Committee: “Becuase the Democrats now have their narrative. Thanks to this guy, who just pops off and undermines the Constitution. They don’t want the Republicans questioning him– why he didn’t go into areas he shouldn’t have gone into, why he hired who he did hire, what he means by obstruction of justice. The Democrats don’t want any opposition.” (Continued Below)

“The Republicans must demand that [Mueller] come there, he testifies under oath. They want 8, 9, 10 hours until they’re done. They control the Senate Judiciary Committee. Lindsey, a little less T.V., a little more oversight. Call him in front of your committee, subpoena him. I don’t care if he’s gone off to the villages… wherever he is retiring to, drag him back,” Levin demanded.

“You don’t get to drop bombshells like that, throw Molotov cocktails like that, undermine a President, then go off into the sunset,” he declared. (Continued Below)

Trump’s lawyer and former New York Mayor Rudy Giuliani has also called on Mueller to testify following the conclusion of his investigation and to explain how and when he came to the determination that there was not adequate evidence to prove that President Trump and his administration colluded with Russian forces, reported Fox News.