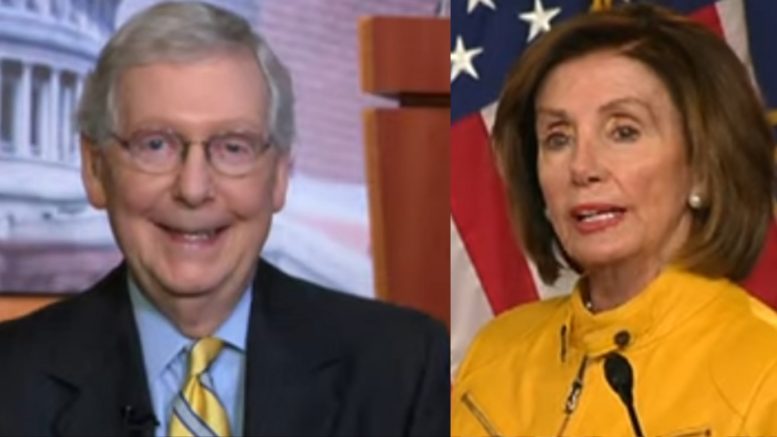 House Speaker Nancy Pelosi took a jab at Mitch McConnell during a recent press conference, where she mocked McConnell’s “Grim Reaper” nickname he calls himself.

Locked and loaded with a stage prop titled “McConnell’s Graveyard,” Pelosi said, “McConnell seems to take pride in calling himself the ‘Grim Reaper’. It’s part of his political campaign. It’s part of the pride he takes as leader of the Senate.”

“And, as you see, what he wants to bury,” Pelosi continued pointing to her poster board. “None of these thing are going to pass. They won’t even be voted on. So think of me as the ‘Grim Reaper’.”

McConnell responded to Pelosi on Laura Ingraham’s program, where he said, “She’s got it right! She’s got it absolutely right!”

“For the first time in my memory, I agree with Nancy Pelosi. I am, indeed, the Grim Reaper when it comes to socialist agenda that they’ve been jetting up over in the House, with overwhelming Democratic support. And sending it over to America, things that would turn us into a country we’ve never been,” McConnell said.

He cited things like Green New Deal and Medicare For All as two examples of socialist bills that Democrats are trying to pass to back up his claim. Video Below

McConnell also revealed Democrats’ plan to expand the Supreme Court in their favor, and how they are attempting to make the District of Columbia and Puerto Rico states in order to gain multiple Democrat Senators out of it.

Related Article: Levin Lashes Out At Pelosi For Accusing Trump Of Being A Criminal: ‘Nancy Pelosi Is Fascistic’

“So, this is full bore socialism on the march in the House. And yea, as long as I am Majority Leader of the Senate, none of that stuff is going anywhere.” Video Below