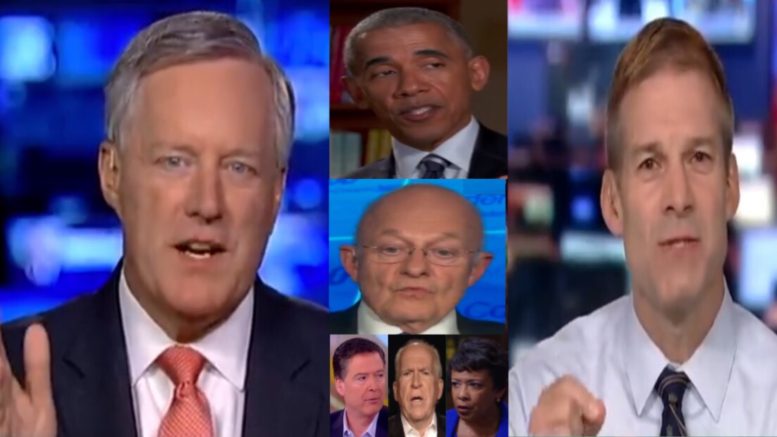 Monday night on Fox News, host Sean Hannity discussed newly released documents obtained by the American Center for Law and Justice through a Freedom of Information Act and explained how it is now some of the clearest evidence to date of what is nothing short of an attempted coup against PresidentTrump.

“These documents shed even more light on this timeline of corruption and an effort to try and undermine — well, first stop and prevent a president from winning they didn’t like and rig an election, but then afterward, to undermine the duly elected President,” Hannity said.

According to new documents, the Director of the National Intelligence Office was eager to get the new procedures ‘signed by the attorney general before the conclusion of this administration.’ Not only that, around the same time the DNI General Counsel, Robert Litt, wrote, “I really want to get this done and so does the boss.” It is likely a reference to James Clapper or former president Barrack Obama.

Sean Hannity said, “And here’s the kicker: the NSA discussed in early January 2017, it could, ‘have a signature from the A.G. as early at this week, certainly prior to the 20th of January.’ That would be the date of President Trump’s inauguration.”

“OK. Let’s break this down. What does it all mean? For eight years, the Obama administration did not allow the sharing of raw information with 17 separate agencies, they only allowed three. And then literally in the final days, just before Donald Trump is about to become President, there was a complete overhaul of our intelligence gathering apparatus to give a lot more access of the most sensitive, raw, and in many cases not even confirmed material– to deep state bureaucrats without getting any input from the new incoming administration,” Hannity explained. (Continued Below)

According to ACLJ, on December 15, 2016, after President Trump’s election, DNI James Clapper executed a document entitled “Procedures for the Availability or Dissemination of Raw Signals Intelligence Information by the National Security Agency Under Section 2.3 of Executive Order 12333.” On January 3, 2017, then-Attorney General Loretta Lynch executed the document, indicating her approval.

“Now, it was championed by Clapper’s DNI. It was signed by Loretta Lynch. Remember, there are some of the same people involved in the phony Russia collusion probe, and in the case of the attorney general. What really happened on the tarmac in Phoenix, Arizona, when [Lynch] said she was talking to Bill Clinton for 45 minutes about grandkids, just days before she is supposed to make a decision whether to indict his wife or not?” Hannity asked on Monday during his opening monologue.

“Now, Crossfire Hurricane, Hillary Clinton’s exoneration without an investigation, don’t forget, vastly expanding access to this intelligence material meant it was harder to trace the information, harder to weed out the leakers, harder to hold anyone in the deep state accountable. They knew exactly what they were doing. They were trying to put the intelligence on the radar of as many people as possible so they would not be able to find the people who knew what they did was an abuse of power. It was corruption at the worst level, but it’s still being exposed anyway,” he added. (Continued Below)

“They know they had two weeks to get this done. Really? Is this what they cared about with two weeks ago? Deep state in a mad scramble. It looks like Clapper was leading the way,” Hannity expressed.

“What we saw during the last month of 2016 — in December of 2016 and January of 2017, was unbelievably unusual activity that was happening on part of the Obama administration.  So, this doesn’t come as a surprise. Here’s the interesting point: I can tell you that John Durham and Attorney General Barr are going to get to the bottom of it. And they are including in part of their surveillance looking at the intelligence community to make sure that justice is brought,” Meadows explained.

Meadows noted that he just got back from North Carolina and here’s what I heard: “They’re tired of the talk. They want to see people… [they’re saying] it’s time that somebody goes to jail for truly trying to overthrow this President who was duly. And I think accountability is around the corner.” (Video Below)

Jordan responded and laid out the case: “This was really easy what they were trying to do. This is one of the ‘six ways from Sunday’. Remember, at the same time they are trying to change all of this with how the intelligence information is shared among various agencies? Chuck Schumer, the top Democratic in the United States Congress at the time, is on one of the other various networks, and he says this: ‘If you mess with the intelligence community, they have six ways from Sunday getting back to you.’ So, this is one of those six ways.”

(Related: Jordan Exposes ‘Overwhelming Hypocrisy’ By Dems In Wake Of The Declassification Order)