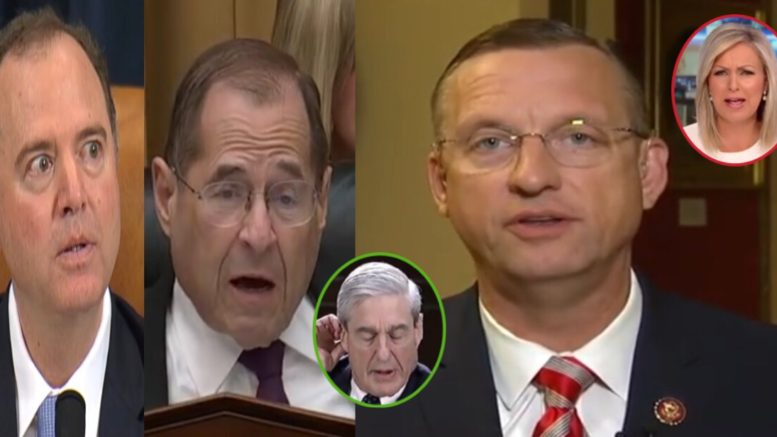 Congressman Doug Collins (R-GA) spoke with host Sandra Smith on Fox News’ “America’s Newsroom” Wednesday where he weighed in on Robert Mueller’s upcoming public testimony before the House Judiciary and Intelligence Committees that are set for Wednesday, July 17th.

Collins, the Ranking Member on the Judiciary Committee, is prepared with a long list of questions for Mueller that come back to the timing and integrity of his report.

Rep. Collins explained that his list of questions for Mueller is long and will get “longer as we go forward.”

He laid out some of the questions he will ask: “Where did he start? How did he assemble his team? Why did he assemble the team that they did? When did they decide there was no collusion and there’s no conspiracy being done? When did they decide to actually put part of the dossier and discuss it report and discuss it in the Mueller report and not discuss other parts?”

“There are just a plethora of questions here that all go back to the timing, the integrity, and the part of this report– those are all questions that he’s either going to have to answer or he’s gonna have to sit there and try to avoid,” Collins said.

He noted that Mueller testifying will be a big moment but said that he’s been asking for him to testify since Mueller’s report was released to the public. “This is a discussion we’ve talked about, for many on our committee–to say why would our committee waste valuable taxpayer dollars doing worthless hearings like we have done this month with the Chairman is trying to make an impeachment-like case and still not get to the heart.” (Continued Below)

Collins believes that Robert Mueller will explain that his report speaks for itself. “There was no conspiracy, no charge of obstruction, he’s done, he doesn’t want to talk about it anymore,” he suggested.

“What he really doesn’t want to talk about is stuff that surrounds the report on why he got to areas he did, and why he left out things in the process that began to be something that could have been done a lot quicker. This is something the Democrats, I believe, that they were finally forced into doing this because they had no other options. But, I think at the end of the day, it’s going to reinforce what the report said. Everybody has had a chance to read this. It says what it says. It’s not going to say anything different,” he continued.

The Georgia Congressman noted, “What we’re going to find out is the dark underbelly of the corrupt cabal that started it all.” (Continued Below)

Then, Rep. Collins dropped a bombshell and announced that Jerry Nadler “did not” inform him that he was going to issue a subpoena to Robert Mueller, instead, he revealed that he heard it through press releases.

Sandra Smith was shocked to find out that Collins didn’t know ahead of time. “You’re the ranking member on the Judiciary Committee!” She declared.

“That’s the way my Chairman tends to operate these days, it seems. He [did not have] a discussion with me personally about this. There was some discussion on a quick five minute heads up to our staff, but I was hearing about it from the press, before I heard about it from the Chairman himself,” Collins admitted.

He believes it will be up to Robert Mueller if we learn anything new. “[Mueller] said he would only talk about the 4 corners of the report and not answer hypotheticals. We’re gonna ask direct questions on our side, direct questions about how he got there, what did he do, how did the investigations go, why did they not do that,” he said.

“At the end of the day, this is a chance to put this to bed. The Democrats have exhausted all of their cards trying to tarnish this President, who is doing a good job. This is a time for them to put it away,” the Ranking Member recommended. (Video Below)

“I think Adam Schiff again is having trouble with the facts, it’s not new for Adam Schiff, but what I heard from my Chairman last night, was that Mr. Mueller wanted a subpoena to come in,” Collins explained.

He concluded that the “end game” is to “finally put this to bed.” “We have a President for 2 1/2 years that’s doing the best job he can under the cloud of the Mueller report and everybody’s saying this Mueller report was going to do dangerous things and terrible things to him. At the end of the day, it did not. There was no collusion, there was no obstruction. This was not anything, and now, it’s time to move on,” he insisted.

(Related: Sen. Graham Responds As Mueller Agrees To Testify: ‘It Will Blow Up’ In Dems Faces)