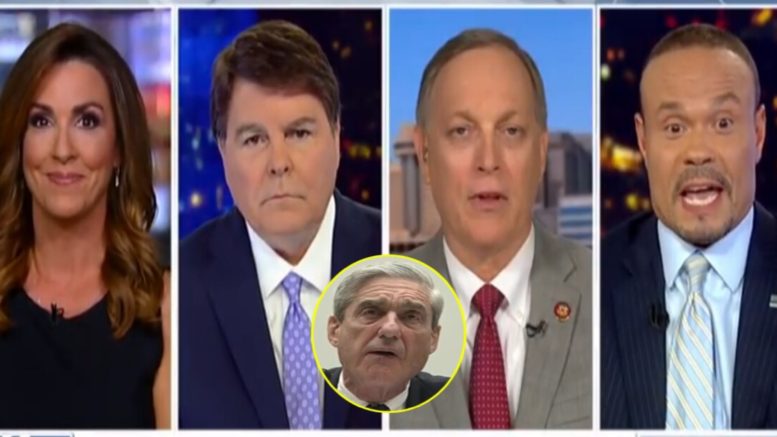 Investigative reporter Sara A. Carter, legal analyst Greg Jarret, and Rep. Andy Biggs (R-AZ) spoke with Dan Bongino on Fox News Friday where they slammed the Mueller report and laid out questions to be asked of former Special Counsel Robert Mueller ahead of his July 17th hearing before the House Judicial and Intelligence Committees.

Gregg Jarrett and Dan Bongino believe when Robert Mueller testifies, it will blow up in the Democrats’ faces because the report is written like an op-ed instead of a serious legal document. Further, they noted that Mueller left a lot of key facts out of his report that Republicans will pounce on.

Gregg Jarrett said there is misinformation in the report and even parts that Robert Mueller “invented without sourcing it”. “[Mueller] made it up, he plucked it from his own imagination. The report, frankly, is so disappointing in so many ways, it’s disorganized, contradictory, inconsistent, and it’s so schizophrenic, you’ll get whiplash. It’s almost a garbage document like the dossier,” he announced.

“And what’s frustrating most of all are the things he doesn’t look into. He’s looking into Russian interference– how can you not look into Hillary Clinton paying for Russian disinformation to interfere in the election. There’s none of that in there– the dossier. There’s nothing in there about Glenn Simpson and Fusion GPS– [John] Brennan and [James] Clapper, all of them trying to interfere in the election by spreading Russian disinformation,” Jarrett added.

Mueller detailed in his report the “Trump Tower meeting,” but failed to mention that the Russian lawyer Natalia Veselnitskaya, who worked for Prevezon Holdings was hired by Hillary Clinton.

“She meets with Glenn Simpson of Fusion GPS the day before and the day after that meeting. Glenn Simpson’s like ‘no, we didn’t discuss the Trump Tower meeting at all.’ These are [really] significant questions that need to be answered,” Sara Carter insisted. (Continued Below)

Carter believes everything the Democrats are planning when Robert Mueller testifies is “total theater.”

“They are continuously– including Andrew McCabe, who’s been on MSNBC over and over again, who was basically thrown out of the FBI for lying and fired by then-Attorney Jeff Sessions for being a liar and the IG caught him lying multiple times and leaking information to the media– this is how they are trying to keep disinformation alive by holding this hearing, which is theatrical, which is not gonna resolve anything. And by the way, Robert Mueller really can’t go outside the purview of his report,” she said.

Carter noted there is a lot of unanswered questions and suspects Republicans will have an upper hand because there will be questions that Mueller can answer. “Remember, the Democrats are just trying to keep the rumor alive. It’s just a rumor, it’s a lie because they have absolutely no evidence of anything, otherwise they would’ve used it,” Carter suggested. (Continued Below)

Rep. Andy Biggs said that Robert Mueller’s team was “radicalized” and put out a report that is “not a legal brief.”

“He should never have done it in the first place and second, it’s basically an opinion piece. What’s going to happen I think, this is going to look a lot like the Hope Hicks interview. You had Democrats reading and asking her to read direct quotes from the Mueller report and Hope Hicks said, ‘Yeah, that’s my statement.’ That’s what you’re gonna get with the Democrats with Mueller. You’re not going to get anything new from the Democrats. In fact, Chairman Nadler has already said, ‘We’re probably gonna have him read things,'” Biggs said.

“This is designed to keep up their narrative of something that happened that there was an obstruction of justice, that there was somehow the President’s guilty of something. There is nothing here and they know it. They can’t get him on anything that’s criminal, so gonna just attack and sully his name with these consistent rumors that they’ve been putting out from day one,” he added.

Bongino thinks the key question to ask Robert Mueller is: “When did you know this collusion was a hoax? Weissmann, his pit bull, knew in August 2016, the dossier had serious issues. When did Mueller find that out?”

Jarrett asked why Mueller didn’t issue a report earlier because he knew from a matter of months of his appointment there was no collusion. “Isn’t it true you wanted to keep this going to influence the 2018 interim elections so that Democrats could take over the House? And I think that’s a legitimate question to ask. Also, Mueller interviewed the day before he took the job of Special Counsel, sitting in the oval office– isn’t it true Mr. Mueller that you and the President actually discussed the reason that Comey was fired, which makes you a witness in your own case on the obstruction investigation,” he explained. [Emphasized] (Continued Below)

Carter also believes the interview between Kathleen Kavalec and Christopher Steele with her notes will come in to play.

“The Republicans will swoop right in on that and ask questions about that. I think this is significantly important and those emails and those exchanges and Victoria Nuland with the State Department, are going to come up. They questioned this dossier that was fed by a foreign intelligence officer from MI6, Christopher Steele, who took a ton of this information from the Russians. We need to ask John Brennan as well, ‘What did you know? How were you involved in this and where did this investigation begin?'”