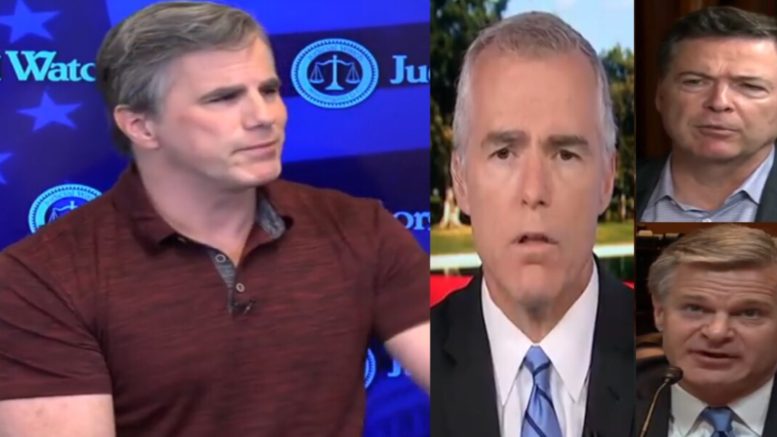 Judicial Watch is fighting for the American people and continues to do the heavy lifting exposing the absolute truth. While Democrats continue their dirty charades against a sitting President, and scheduling hearings with anyone associated to Trump in their search to “find crimes”, Judicial Watch is getting to bottom of the real corruption that the mainstream and Deep State is covering up and burying.

In a new lawsuit, Judicial Watch announced last Tuesday that it filed a Freedom of Information Act (FOIA) lawsuit against the U.S. Department of Justice for records of communications between the Federal Bureau of Investigation (FBI) and former FBI Deputy Director Andrew McCabe related to his book, The Threat: How the FBI Protects America in the Age of Terror and Trump.

According to a press release from Judicial Watch, the suit was filed after the FBI failed to respond to a February 8, 2019, FOIA request seeking:

The Justice Department dealt a stunning blow to former Acting FBI Director Andrew McCabe in March 2018, just days before he would have been eligible for a lifetime pension, but ended after determining that he leaked to the media and lacked “candor.”

“Pursuant to Department Order 1202, and based on the report of the Inspector General, the findings of the FBI Office of Professional Responsibility, and the recommendation of the Department’s senior career official, I have terminated the employment of Andrew McCabe effective immediately,” Former Attorney General Jeff Sessions said in a statement. (Continued Below)

As detailed in this report, the OIG [Office of the Inspector General] found that then-Deputy Director Andrew McCabe lacked candor, including under oath, on multiple occasions in connection with describing his role in connection with a disclosure to the WSJ [The Wall Street Journal], and that this conduct violated FBI Offense Codes 2.5 and 2.6. The OIG also concluded that McCabe’s disclosure of the existence of an ongoing investigation in the manner described in this report violated the FBI’s and the Department’s media policy and constituted misconduct, per JW.

“McCabe played a central role in Spygate, the Deep State’s effort to spy upon and undermine President Trump,” said Judicial Watch President Tom Fitton. “We aim to find out if McCabe’s book was properly vetted or simply rubberstamped by anti-Trump bureaucrats before being published.” (Video Below)