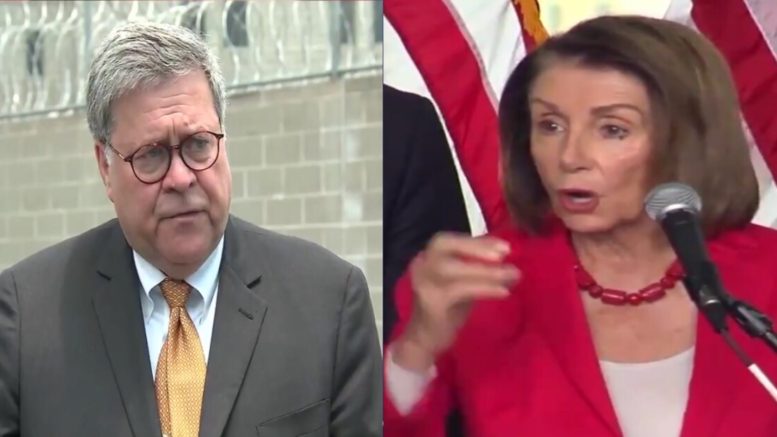 Speaker Nancy Pelosi (D-CA) claimed Monday at an event in San Francisco that President Trump’s push to include a citizenship question on the 2020 census is an effort to “make America white again” in an adaptation of his campaign slogan.

This comes after President Trump told reporters last week on the South Lawn of the White House that he is considering an executive order to ensure the citizenship question is included on the census after the Supreme Court blocked the effort in a ruling last month.

“We’ll see what happens,” President Trump said Friday. “We could also add an addition on. So we could start the printing now and maybe do an addendum after we get a positive decision. So we’re working on a lot of things including an executive order.”

“This is about keeping — you know his hat — make America white again.” Pelosi said at an event in San Francisco about election security legislation, referring to the red “Make America Great Again” hats that are popular among Trump supporters, as per The Hill.

The Justice Department reversed course last week and said that officials have been ordered to find a way for the Trump administration to include a citizenship question on the census. (Continued Below)

Attorney General William Barr however, said Monday that he believes the Trump administration can legally add a citizenship question to the 2020 census, though the Supreme Court ruled against its inclusion last month.

In an interview with The Associated Press, Barr said he has been in regular contact with President Trump about the question, which the president is determined to see featured on the decennial survey.

“I agree with him that the Supreme Court decision was wrong,” Barr said. The attorney general added that he thinks there is “an opportunity potentially to cure the lack of clarity that was the problem and we might as well take a shot at doing that.” (Continued Below)

However, the AP cited a senior official who said President Trump is expected to issue a presidential memorandum to the Commerce Department directing it to include the citizenship question on the 2020 census. Action is expected to be taken in the coming days, as per The Hill.

However, President Trump directed the Justice Department and the Department of Commerce to do “whatever necessary” to get the citizenship question on the 2020 census and tweeted that those efforts would move forward.

AG William Barr: "I think over the next day or two you'll see what approach we're taking and I think it does provide a pathway for getting the question on the census." https://t.co/uHWYbbizj7 pic.twitter.com/xHpiX5Axzf

Monday, AG Barr told the @AP that the Trump administration will take action in the coming days that he believes will allow the government to add the census query.@SpeakerPelosi claims it's because Trump wants to “Make America White Again.”

….to do whatever is necessary to bring this most vital of questions, and this very important case, to a successful conclusion. USA! USA! USA!

So important for our Country that the very simple and basic “Are you a Citizen of the United States?” question be allowed to be asked in the 2020 Census. Department of Commerce and the Department of Justice are working very hard on this, even on the 4th of July!