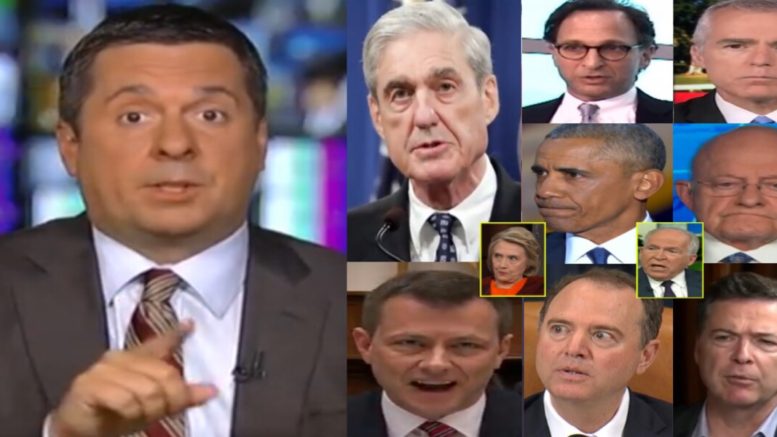 Nunes wants Mueller to testify because he has a lot of questions for him, however, he believes it is not wise for him to do so.

The California Congressman noted Robert Mueller’s hearing got “kicked” back a week later, but speculates that the date could “slip” again, or not even happen at all. “We’ll see, but we’ll be prepared,” he said.

Nunes believes there are “plenty” of underlining issues in the “Mueller dossier” as he coined it, however, called it an embarrassment after how much was spent to produce it. “If you went to the House Republican report from the Intelligence Committee a year ago, it’s a far better and far superior product. And there are so many unanswered questions that I think Mueller has a responsibility to answer,” he explained.

He also responded to a lawsuit Judicial Watch filed against the DOJ to obtain records of communications surrounding former FBI agent Andrew McCabe and claims that he made in his recent book.

President Trump tweeted on Saturday, “Andy McCabe is a major sleazebag. Among many other things, he took massive amounts of money from Crooked Hillary reps, for wife’s campaign, while Hillary was under “investigation” by FBI! (Continued Below)

“This is a guy who tried to kick me out of [the] Gang of Eight meeting when this whole investigation was kicked off way back in May 2017. I think he’s a bad dude. I think he obstructed a congressional investigation, our investigation. And just on that alone, he ought to be prosecuted for the things he did to ruin our investigation in the House of Representatives, not to mention everything else he did,” Nunes expressed.

Further, he responded to a report about the Southern District of New York’s prosecutors who are unlikely to charge members of the Trump organization after they were investigating whether officials broke campaign finance laws. (Continued Below)

Asked if perhaps some of Trump’s critics will give up their fight against the President after the Trump organization investigation, Nunes said, “I don’t know that they’ll ever give up their fight. This is just another example of they put more bait on the hook and throw it out. I’ll tell you, when they’re bringing Robert Mueller in, they’re running out of bait. They don’t have much left.”

“With all that being said, what have we really been looking at? What did Mueller really do? This was not an investigation into collusion or what was happening with Russias. They weren’t trying to figure out what the Russians had done. We already knew what the Russians did. This was nothing more and nothing less than an ‘obstruction of justice trap!’ It was not an obstruction of justice investigation. It was a trap that they opened for the better part of two years to try to get the President to fire somebody, to do something so they could then move to impeachment,” Congressman Nunes unveiled. [Emphasized]

He noted that it never happened because “we got a real Attorney General and a real grown-up” who walked in the door and said, “Okay, where are the Russians?” adding, “Mueller and his team hadn’t seen any Russians expect the Democrats’ Russians that they were working with to get the dirt on Trump.”

Nunes also pointed out that the dossier wasn’t written by Christopher Steele. “It was probably written by Fusion GPS, and the sources I think, are even more important– that came from other bad actors. There’s a lot of people in the U.K. that have a lot to answer for,” he added. (Video Below)

Andy McCabe is a major sleazebag. Among many other things, he took massive amounts of money from Crooked Hillary reps, for wife’s campaign, while Hillary was under “investigation” by FBI! https://t.co/bHweiBBj7z