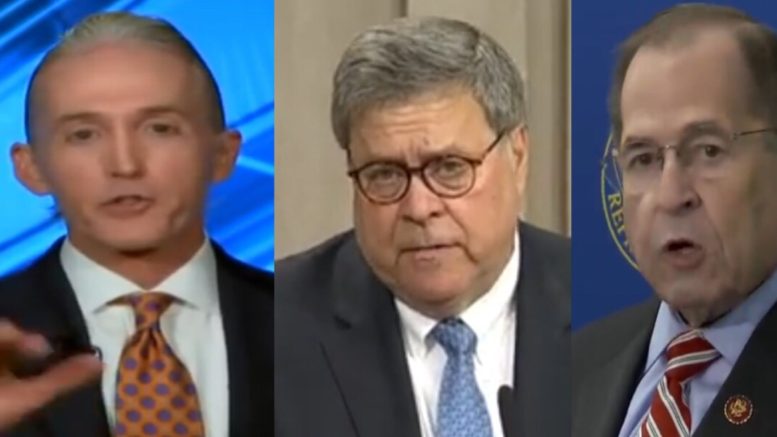 The House Wednesday voted to hold Barr and Ross in criminal contempt, saying they were stonewalling congressional probes into the Trump administration’s efforts to add a citizenship question to the 2020 census, as reported by Fox News.

“Barr is ostensibly being held in contempt for not turning over documents he has no legal obligation to turn over. In fact, it would be against the law to do so,” Trey Gowdy said.

Gowdy believes the contempt of Congress didn’t matter after Tuesday when Speaker of the House Nancy Pelosi violated House rules.

(Related: Rep. Collins Unloads After Pelosi Forced Her Party To Violate House Rules: ‘That Shows The Ultimate Disrespect Of The Office She Holds’)

“Nobody cares what Congress does. What we saw yesterday — they can’t even enforce their own House rules against their own members. So, there used to be a stigma attached to being held in contempt of Congress. There ain’t no more,” Gowdy continued. “So, I would tell Bill Barr, ‘Your reputation as an incredible lawyer is intact. Don’t give it another thought.'” (Continued Below)

Gowdy argued that Ross would need to explain the administration’s mishandling of the Census question but said it would be hard to get a fair hearing.

“With respect to Wilbur Ross on the census, I think the administration mishandled it and they do have some explaining to do. It’d be nice to explain it in front of a fair jury that has not already made up its mind. But when 60 Democrats vote to impeach you before [Special Counsel Robert] Mueller has issued a single consonant or vowel in his report, that ain’t a fair jury, he said.

However, Gowdy thinks that Congress has lost its power under Democratic leadership. (Continued Below)

“Congress has worked itself into obscurity [and] irrelevance. When you can go on the floor of the House as the Presidents say ‘I’m going to do it with or without you,’ and Congress stands up and cheers, you have rendered that branch of government feckless and irrelevant. Congratulations. The House doesn’t matter anymore. White House and Senate [matter], House doesn’t matter,” Gowdy added.

(Related: Nadler Alleges The President & Barr Lied, Gowdy Responds: Where Are The ‘Presumptions Of Innocence’?)