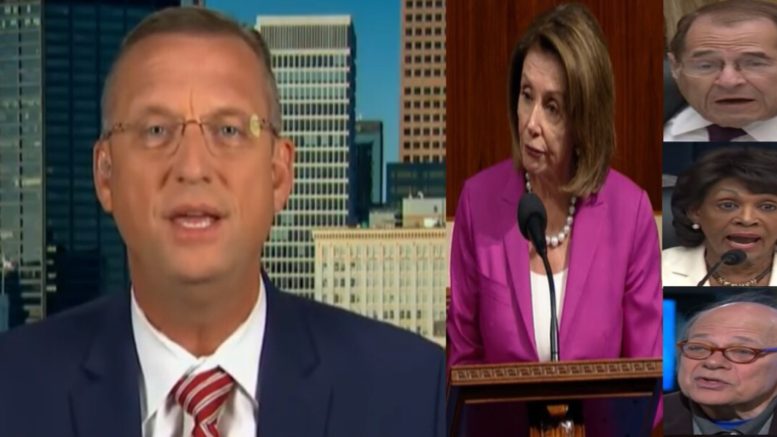 As Swamp Drain previously reported, Pelosi’s speech on the House floor Tuesday was “clearly over the line” according to Collins, and he defended his decision as to why he demanded her words be “taken down” from the public record.

Speaker Nancy Pelosi was asked by Rep. Collins to “rephrase” her comments, in which, she would not. After Collins’ objection, the Democrat-controlled House voted along party lines “not” to strike Pelosi’s words from the record and voted separately to restore her speaking privileges. A resolution was then passed to condemn Trump’s “go back” remarks directed toward four progressive freshmen Democratic women.

Collins said on Sunday that there is a certain decorum that is required on the House floor. “As the leader of the House, the Speaker is the one in charge of our rules. And for someone who very much values the debate and the decorum of institution… we can vehement debate, we can disagree violently even in our language, but there are certain things that we cannot say,” he argued.

“And drawing on the personalities of the President and using that, it just shows how frankly, degrading the Democratic party has [become]. The Speaker ought to be embarrassed right now. She should not look back on this as a victory. It was a moment of frankly, that brought dishonor to the House,” Collins expressed. [Emphasized]

“Because the body never voted to say ‘that she didn’t break the rules,’ in fact, she was told ‘she broke the rules.’ But what she forced her party to do, was take away her punishment. So, she basically says, ‘Yep, I broke the rules, but I’ll use my folks to say that I don’t have to be punished for that’, which meant that the words would be stricken– that she couldn’t speak no more on the floor. This shows you how dysfunctional this Democratic majority has been. They have done nothing expect run rough shots over the institutional processes in the House,” he added. (Continued Below)

Maria Bartiromo turned the subject next to what the Democrats have accomplished in the 7 months into their leadership of the House of Representatives. “Give us your priorities, what are the priorities of this Congress, and what has gotten done so far?” she asked.

“What I’m seeing is simply they’re playing to a base. We’re seeing bills come to the floor that have inherent flaws in them, that make them unworkable, even if they were signed into law. They’re rushing stuff to the floor to free a press release frenzy, that their base wants to see. And really at the end of the day, they’re not getting anything done,” he added. (Continued Below)

“A classic example of this is immigration. They’re ready to yell– earlier this year they said there was ‘no crisis on the border.’ Now, they’re saying there’s a crisis on the border, but yet just a hundred of them a couple of weeks ago refused to send money, to actually help on the border. That’s hypocrisy in it’s highest, and that’s what we’ve seen in the first 7 1/2 months. All they want to do is bash the President, all they want to do is talk about how bad he is,” the Georgia Congressman pointed out.

“They have simply failed when it comes to governing in the House of Representatives!” Collins proclaimed.