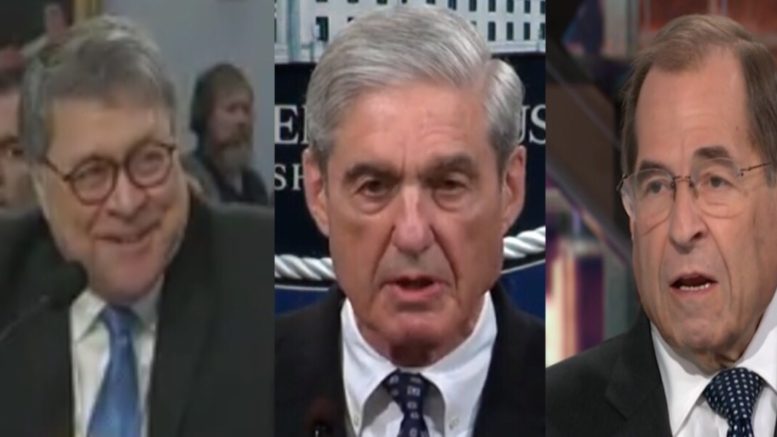 As Mueller is set to testify Wednesday before the House Judiciary and Intelligence Committees, the Justice Department sent a letter to former special counsel Robert Mueller on Monday night telling him that he needs to “stay within the boundaries” of his 448-page report.

However, House Judiciary Chairman Jerry Nadler (D-NY) told Mueller he can forget that note because nothing is off-limits.

Robert Mueller said in May, during his press conference, he had no interest in testifying before Congress, that his full report was his testimony and that “any testimony from this office would not go beyond our report,” further adding, “I hope and expect this will be the only time I will speak to you in this manner.”

“It contains findings and analysis, and the reasons for the decisions were made. We chose those words carefully, and the work speaks for itself. The report is my testimony,” Mueller added. “I would not provide information beyond that which is already public in any appearance before Congress.”

“As the Attorney General [William Barr] has repeatedly stated, the decision to testify before Congress is yours to make in this case, but the Department agrees with your stated position that your testimony should be unnecessary under the circumstances,” Weinsheimer wrote. (Continued Below)

The DOJ reminded Mueller that his testimony should not discuss the redacted information, which includes grand jury testimony.

“Finally, any testimony must remain within the boundaries of your public report because matters within the scope of your investigation were covered by executive privilege, including information protected by law enforcement, deliberative process, attorney work product, and presidential communications privileges,” Weinsheimer wrote.

“These privileges would include discussions about investigative steps or decisions made during your investigation not otherwise described in the public version of your report. Consistent with standard practice, Department witnesses should decline to address potentially privileged matters, thus affording the Department the full opportunity at a later date to consider particular questions and possible accommodations that may fulfill the committees’ legitimate need for information while protecting Executive Branch confidentiality interests,” he added. (Continued Below)

Nadler, however, claimed Tuesday on CNN, that Robert Mueller “does not have to comply with the DOJ letter”.

“He doesn’t have to comply with them, he doesn’t work for them and that letter asks for things that are beyond the power of the agency,” Nadler claimed.

He added, “It’s ‘incredibly arrogant’ for the Justice Department to try and ‘instruct’ him what to say, it’s part of an ongoing coverup by the administration to keep information from the American people.”

House Judiciary Chairman Jerry Nadler says Robert Mueller does not have to comply with the DOJ letter that tells the special counsel to “remain within the boundaries of your public report” https://t.co/cxAWllPJE6 pic.twitter.com/gkWk701DKD

(Related: Nadler Claims Trump Is ‘Guilty Of High Crimes & Misdemeanors’: ‘[He] Has Violated The Law Six Ways From Sunday’)