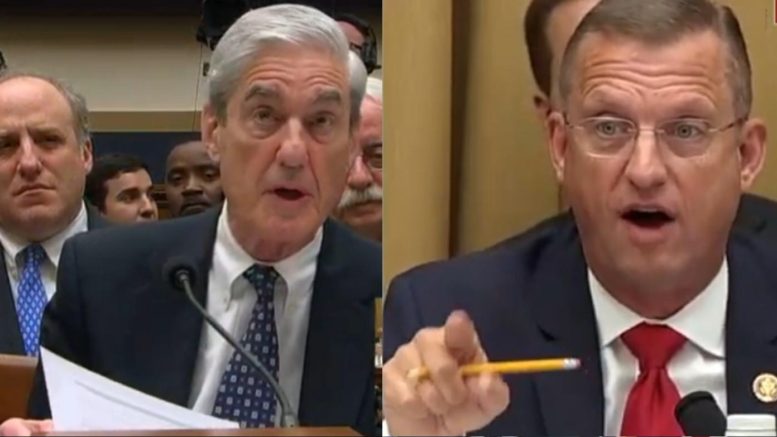 While being grilled by the ranking member of the Judiciary Committee, Rep. Doug Collins (R-GA), caught former special counsel Robert Mueller contradicting his own report.

Collins read a piece from Mueller’s report in Volume 1 that “puts to bed collusion and conspiracy” with Trump and his campaign.

“Although your report states collusion is not a specific offense, and you said that this morning, for a term of art in federal criminal law, conspiracy is. In the colloquial context, are collusion and conspiracy essentially synonymous terms?” Rep. Collins asked.

Mueller then asked Collins to repeat the question.

“Collusion is not a specific offense or a term of art in the federal criminal law, conspiracy is. In the colloquial context, known public context, collusion and conspiracy are essentially synonymous terms? Correct?” Collins asked again.

Mueller answered, “No.” (Continued Below)

“If no, on page 180 of volume 1 of your report, you wrote, ‘As defined in the legal dictionaries, collusion is largely synonymous with conspiracy as that crime is set forth in the general federal conspiracy statute 18 U.S.C. § 371. You said at your May 29th press conference and here today, ‘you choose your words carefully.’ Are you sitting here today testifying something different than what your report states?” Collins directly asked.

Mueller asked for the specific citation to look at in his report to evaluate whether it is.

“Let me just clarify. You stated that you would stay within the report. I just stated your report back to you. And you said collusion and conspiracy were not synonymous terms. Your answer was ‘no.’ In that, page 180 of volume 1 of your report it says, ‘As defined in legal dictionaries, collusion is largely synonymous with conspiracy as a crime is set forth in general conspiracy statute 18 U.S.C. § 371. Now you said you chose your words carefully. Are you contradicting your report right now?” Collins inquired. (Continued Below)

“Not when I read it,” Mueller said as he looked at his own report.

“So, you change your answer to yes, then? Collins asked. “I’m reading your report, sir.”

Collins directed him again to page 180 of Volume 1. “This is from your report,” he said.

“Correct, I leave it with the report,” Mueller hesitantly agreed.

“So, the report says ‘yes’ they are synonymous. Hopefully, for finally out of your own report, we can put to bed the collusion and conspiracy,” Collins concluded. (Video Below)