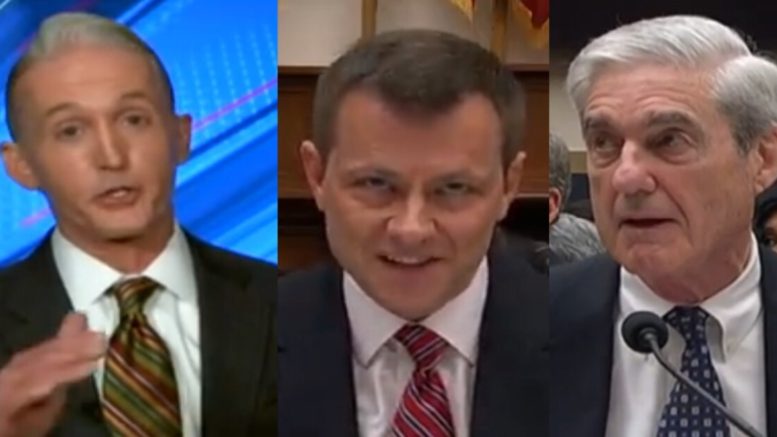 Former South Carolina congressman Trey Gowdy spoke with Martha MacCallum Tuesday on Fox News where he weighed in on ex-FBI agent Peter Strzok suing the FBI and the Department of Justice, saying he has no one to blame but himself.

In his lawsuit, Strzok claimed that he was fired due to “political pressure from President Trump,” and he also alleged that his First Amendment rights were violated, as was his privacy due to leaks of his text messages to the media.

Asked if he thinks Peter Strzok has a case, Trey Gowdy responded, “I missed the part where he also filed a case against [Robert] Mueller. I mean, ‘Mueller fired him.’ Remember, [James] Comey said he would’ve fired him, had he known about the texts. He said [Hillary] Clinton should win 100 million to nothing. He belittled Trump supporters. He promised to stop the presidency. He said he had an insurance policy if that didn’t fail.”

“And the one that I keep bringing up … his comment that he never took official action– Remember when he said he wasn’t interested in joining the Russia probe because he didn’t think it would result in impeachment? This is a counterintelligence career FBI agent, where what Russia did to this country was not enough for him. That’s enough to get him interested. He wanted it to involve impeachment,” Gowdy added. So, if he’s gonna start suing people that fired him, he needs to start with Mueller.”

Asked if he thinks Strzok is doing this for money, Gowdy said, “It could be about money, I don’t know. I’m sure he’s having a hard time getting a job. The challenge I have is feeling sorry for someone who brought every single bit of this on himself. I mean bias is so insidious bias destroys the criminal justice system. It destroys investigations.”

Peter Strzok need blame no one other than himself for writing what he wrote. He was unfit to investigate either of the presidential candidates. How this is going to turn out? I don’t know. It’s D.C. I don’t know what a jury is going to do with him,” Gowdy stated. “But he is unfit for law enforcement and whoever fired him, I guess it was Chris Wray. I am sure Chris did not do it because of pressure from President Trump.” (Video Below)