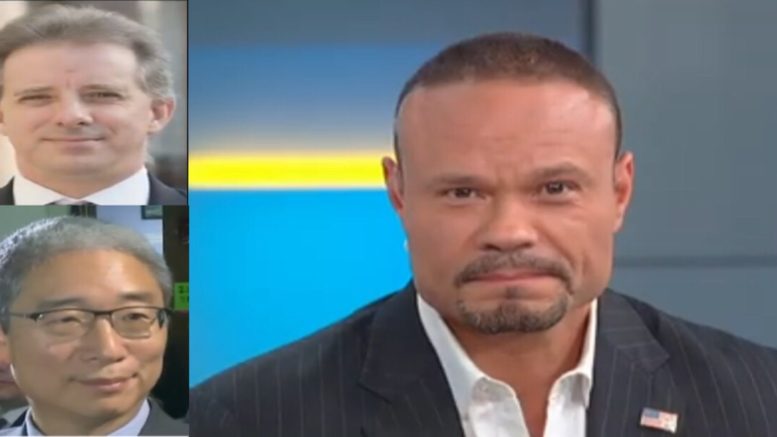 Fox News contributor and former Secret Service agent, Dan Bongino, joined “Fox & Friends” Friday morning where he weighed in on newly released FBI documents and said they are “devastating” for those who initiated the Trump-Russia investigation in 2016, adding that an “information laundering operation” is being uncovered.

This comes as Judicial Watch received documents of FBI 302 interviews with top Justice Department official, Bruce Ohr, which were obtained in response to a Freedom of Information Act (FOIA) lawsuit filed after the Justice Department for failing to respond to an August 6, 2018, FOIA request seeking Form 302s for a number of interviews with Ohr concerning his interactions with Steele.

“There was an effort to target the Trump team with information that was factually inaccurate, that he was colluding with the Russians,” Dan Bongino said, alleging that Christopher Steele’s dossier was a “front” so that the false information could be used to obtain a surveillance warrant.

The FBI formally documented the apparent anti-Trump bias of Steele, a British ex-spy, shortly after the November 2016 presidential election — yet despite the red flags, continued to use his unverified dossier in multiple Foreign Intelligence Surveillance Act (FISA) court warrant application renewals, according to records obtained by Fox News. While much of the information confirmed by the release had previously been reported by Fox News, the FBI documents nonetheless paint a damning picture, Bongino said, per Fox News.

The partially redacted documents, obtained by Judicial Watch, also revealed that Ohr maintained contact with Steele for at least six months after Steele was fired by the FBI for unauthorized media contacts in November 2016. The records further confirmed that Ohr knew of Steele’s anti-Trump bias before the 2016 election.

Bongino questioned Steele’s actual participation with the dossier, arguing his name may have been used because he’d previously provided credible information for the FIFA soccer corruption probe. (Continued Below)

“You had Christopher Steele as a front, it’s called the ‘Steele dossier’, it’s not the [Kathleen] Kavalec dossier, it’s not called the [Glenn] Simpson dossier. Why was Steele used as a front for false information by the FBI? Why was his name slapped on it? The answer is very simple. The answer is very simple: because Steele had been a credible source for the FBI in the past. … In other words, in front of a judge, they could present Steele as a legitimate front for false information,” Bongino explained. “[Steele] was a trusted ally of the FBI.”

Then, he dropped what he thinks is the most damaging of all: “Steele may not have even written the dossier,” Bongino said. “He may have been a part of it.”

Bongino pointed out that Nellie Ohr, the wife of Bruce Ohr who worked for Fusion GPS and contracted by the Clinton campaign, had previously written a dossier on then-Trump campaign chairman Paul Manafort. (Continued Below)

“It begs the obvious question: if Steele’s name is on the dossier because he was credible because he’d worked with the FBI in the past, did he even write it? And if he didn’t, is the lie that much worse that you slapped his name on political information to make it seem legitimate? Devastating,” Bongino said.

Steele previously claimed he was being thrown under the bus and Bongino said he calls this the “movie script theory”: “Christopher Steele’s name is used on this, [the dossier], on information that he did not create. [He] had already acknowledged in sworn in depositions that he hadn’t been to Russia during this time period. If you go back to 2007, not 2017, there is a Wall Street Journal article written by who? You’re never going to believe this, Glenn Simpson.”

“I encourage you to read that article today and then compare it to the dossier. It is the dossier, it’s the same information. In other words, from 12 years, they took a movie script Simpson had, slapped Christopher Steele’s name on it, changed a few of the names to Donald Trump. I’m telling you, you read it today– the cast of characters. It’s devastating,” he added. (Video Below)