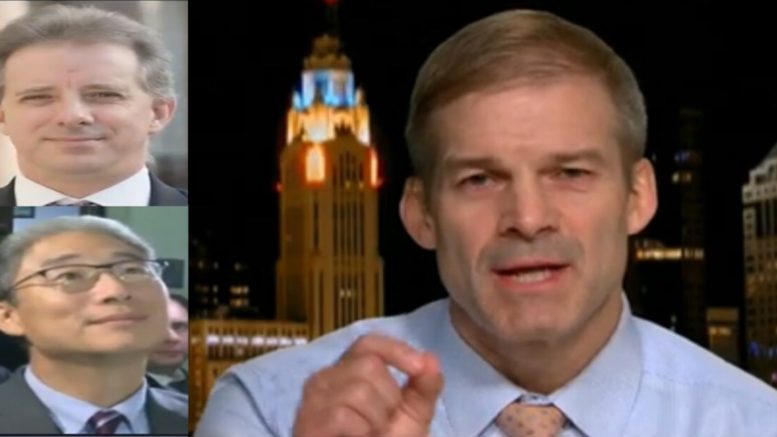 In late September 2016, Ohr described a person (likely Christopher Steele) as “desperate that Donald Trump not get elected and was passionate about him not being the U.S. President. Ohr was secretly staying in contact with Steele on an app called “What’s App” after Steele was fired from the FBI for leaking to the media, according to the released documents.

Rep. Jim Jordan responded to the Ohr bombshell: “Why do you terminate your direct relationship with Christopher Steele and then encourage a top Justice Department official to keep meeting with him and then, coming and briefing you about each of those meetings and each of those conversations? That’s point number one. Seems to me you’re trying to hide something or trying to camouflage something when you do that.” (Continued Below)

“Who were they out to get? The President of the United States! Look at the twelve 302’s and notice the dates,” Jordan urged.

“And never forget, the guy who was leading the investigation said, ‘[Hillary] Clinton should win 100 million to zero. Don’t worry Lisa [Page], we’ll stop Trump; we got an insurance policy,” Jordan said referring to former FBI agent Peter Strzok and his text messages. “When you put this all together, it seems pretty clear what they were up to.”

Read the press release from Judicial Watch about the FBI 302 interviews with Bruce Ohr [HERE].

FBI terminated their formal relationship with Steele because he was leaking.

But DOJ official Bruce Ohr continued to meet with Steele and reported to the FBI about those meetings.

Why did top FBI officials try to hide their relationship with Steele?