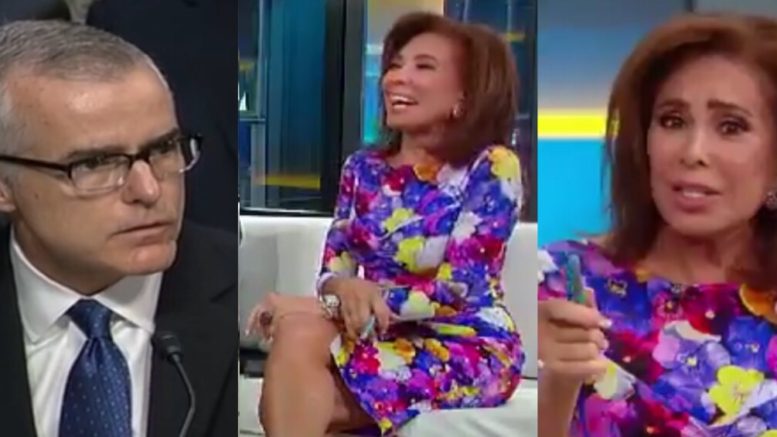 Judge Jeanie Pirro responded to the news Friday morning on “Fox and Friends” by laughing out loud after host Steve Doocy read CNN’s Oliver Darcy’s tweet that read: “Some news: CNN announces Andrew McCabe has been signed as a contributor.”

Andrew McCabe was dealt a stunning blow just days before he would have been eligible for a lifetime pension. He was fired in March 2018, after the DOJ’s Inspector General concluded in his report that McCabe had made an unauthorized disclosure to the news media and lacked candor − including under oath − on multiple occasions.

Judge Jeanine responded and said that McCabe left the department in disgrace. “I believe that there’s a referral by the Inspector General. I expect him to be indicted soon, based on that criminal referral. And, I think he and [James] Comey were going at each other, as I recall, pointing a finger at each other for perjury.”

“And in the end, what you’ve got is a guy now– I mean, CNN is showing its true colors. A guy who was in the middle of the FBI– of this whole investigation, as to whether or not there was this ‘deep state’ trying to prevent Trump from becoming President, and then framing him for Russia collusion,” she explained. (Continued Below)

Co-host Brian Kilmeade asked, “Remember the wearing of the wire? He’s part of that whole thing.”

Jeanine agreed and replied, “He’s part of the whole thing, and that’s why he works for CNN. He’s perfect for them. They’re gonna go on and on.”

“It’s not surprising that they hired him to be honest with you. For every one that listens to that channel, here’s this guy at any moment can be indicted and CNN thinks he’s worthy of credibility,” she said. (Continued Below)

Kilmeade said that Michael Horowitz has his report complete and it will come out in a few weeks. “More than likely, you know the case very well, McCabe’s not going to come out looking too good. What do you think they’re saying at CNN by the fact that they could have a guy who’s in more trouble about a report that’s about to be released? Why wouldn’t they wait?” he asked.

It is always a pleasure to join the @FoxAndFriends crew! Take a look at our conversation this morning. pic.twitter.com/0j6gbXNn4j

Some news: CNN announces Andrew McCabe has been signed as a contributor.