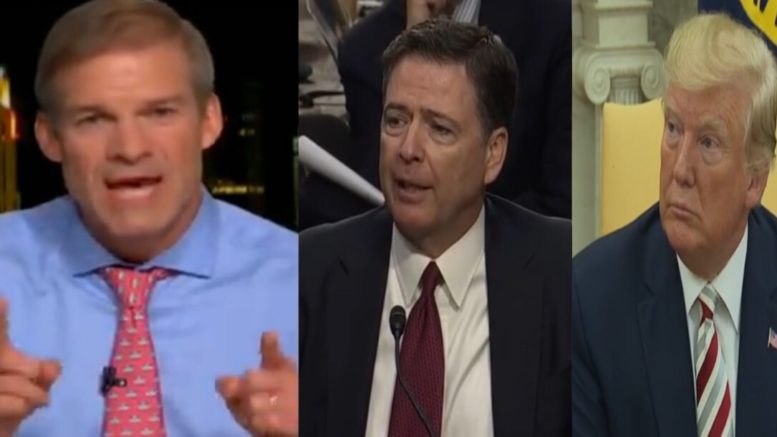 The IG stated that Comey didn’t “safeguard sensitive information” obtained during his tenure as FBI Director and that he “violated standard procedures” in his handling of memos, which were about conversations with President Trump. Further, the IG stated that he set a “dangerous example” for the over 35,000 current FBI employees– and the many thousands more former FBI employees.

Rep. Jim Jordan said that he doesn’t owe James Comey an apology, instead, Comey “owes the whole country” one.

“The same guy who said Trump should lose 100 million to zero. That’s the guy he puts in charge. Jim Comey’s the guy who allows the dossier to be used to get a warrant to spy on a fellow American citizen. And Jim Comey is the guy who leaks sensitive information, broke the rules of the FBI, leaked sensitive information to The New York Times through his friend Daniel Richman– for what reason? To get a special counsel, who put the country through this entire saga that was based on a false accusation,” Jordan explained.

“So, I’m not gonna apologize. ‘Jim Comey owes the country an apology’ because he put us through this for two and a half years. And we know he did it. We know he did it because he was out to get the President based on what happened in the January 6th meeting… at the Trump Tower, where he used the news hook about the dossier– talking about the President about the dossier. And it says on page 17 of the [IG] report, they did it to try to get information and ‘trap the President’. All the while, he was telling the President, ‘You’re not under investigation.’ This is as bad as it gets! And Jim Comey is responsible for the whole darn two and half year thing!” he declared. [Emphasized] (Continued Below)

Comey reportedly sent screenshots of a memo, complete with instructions, to a close friend who gave information to The New York Times after he was fired from the FBI. He testified in 2017 that “his intent was to begin a probe into investigating whether Russia interfered with the 2016 election.”

The IG report noted that while Comey failed to keep sensitive information safe as he took the memos to his house and broke FBI rules, he didn’t provide classified information to the press. Instead, he gave the information to his lawyers, which violated policy.

Comey, however, responded after the release of the report on Twitter by downplaying the seriousness of the IG’s findings and demanded that people apologize for accusing him of lying and leaking. (Continued Below)

“DOJ IG ‘found no evidence that Comey or his attorneys released any of the classified information contained in any of the memos to members of the media.’ I don’t need a public apology from those who defamed me, but a quick message with a ‘sorry we lied about you’ would be nice. And to all those who’ve spent two years talking about me ‘going to jail’ or being a ‘liar and a leaker’—ask yourselves why you still trust people who gave you bad info for so long, including the president,” Comey tweeted.

Jordan also tweeted that Comey thinks “he’s above the law.”

(Related: Rep. Collins Reveals Why Comey & ‘The Corrupt Cabal’ Should Still Be Worried: ‘We Still Have A Lot Left To Go’)