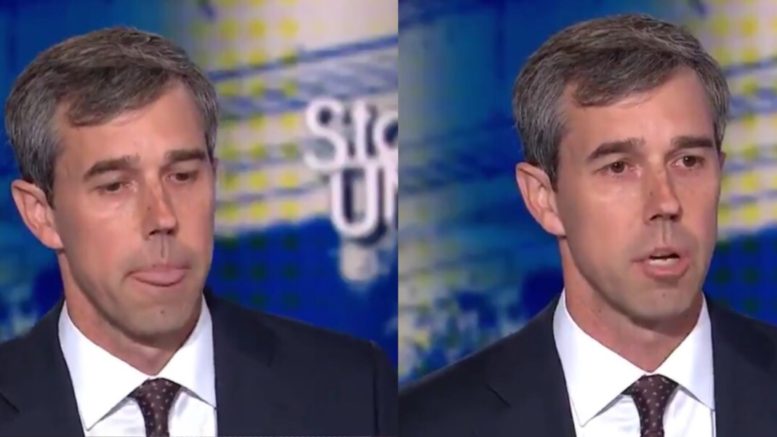 Robert Frances “Beto” O’Rourke, a 1 % Democratic presidential candidate, is politicizing and fundraising off of a mass shooting that occurred in his state of Texas.

O’Rourke, on Sunday night, unveiled a new t-shirt after a Saturday shooting in west Texas that killed seven people and injured more than 20 in Midland and Odessa that features the slogan “This Is F—ed Up.”

O’Rourke released a $30 black t-shirt that repeats the language he used during a campaign speech and on-air during an interview on CNN’s “State of the Union” Sunday.

“The rhetoric that we used, the thoughts and prayers that we just referred to, it has done nothing to stop the epidemic of gun violence to protect our kids, our families, our fellow Americans in public places– at a Walmart in El Paso where 22 were killed, in Sutherland Springs in a church,” he said.

“One or two a day all over this country, a hundred killed daily in the United States of America,” O’Rourke continued. “We’re averaging about 300 mass shootings a year. No other country comes close, so yes, ‘this is f—ed up! And if we don’t call it out for what it is, if we’re not able to speak clearly, if we’re not able to act decisively, then we will continue to have this kind of bloodshed in America and I cannot accept that.”

During the weekend, O’ Rourke told the press on Saturday that he would “implement a sweeping government buy-back policy for two types of assault rifles” if he were elected president in 2020. “If you own an AK-47 or AR-15, you’ll have to sell them to the government,” he said. (Video Below)

Beto uses the F-word to give weight to his argument about gun control, and also because he heard JFK used it a lot https://t.co/WyBzUMFUk5

While on the campaign trail:

We don't know how many have been killed. We don't know the motivation. But here's what we do know: This is fucked up. pic.twitter.com/NRvyPfUjiM

Politicizing and fundraising off of a mass shooting:

New in the store…

100% of the proceeds will benefit @MomsDemand and @AMarch4OurLives.

This is fucked up. We can change it. https://t.co/PFRWFCypAl pic.twitter.com/Us1V4mz1cf

Some responses on Twitterverse:

Beto O'Rourke thinks he sounds more grown up when he uses naughty words. But he doesn't.

And he wants to lecture Americans on violence?

It doesn't matter how much Beto wants to curse on television about evil people doing evil things, his campaign is going nowhere.

The FEC also needs to fine CNN for allowing Beto to use the "F" word during their segment. What happened to the 10-sec rule?

Wow! Beto O’Rourke can drop the f- bomb on CNN. And they don’t do anything about it. He must have White privilege over there.😂🤣 https://t.co/s4p1lGDxlr

So edgy to drop an F bomb on CNN….you’re still polling below 5%

Hey Robert, are you related to the guy who plays Napoleon Dynamite? You are a spitting image of him. I think it is the mouth.

That's a nonsense term the Left uses to generate hysteria

He means ban and confiscate all semi-automatic weapons. The Constitution says no