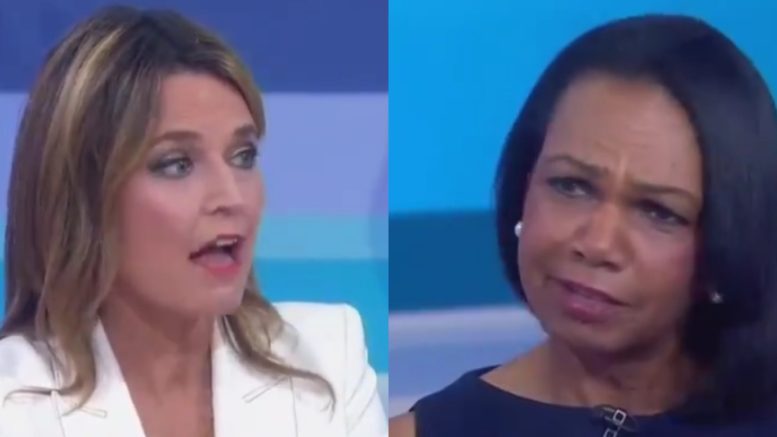 While appearing on Wednesday’s Today Show, Former Secretary of State Condoleezza Rice swatted down a suggestion made by NBC’s Savannah Guthrie that Russia may have helped President Trump win the 2016 election.

As per The Washington Times, Rice was on NBC to promote her new book “To Build a Better World: Choices to End the Cold War and Create a Global Commonwealth” along with her co-author Philip Zelikow. However, things took an awkward turn when Guthrie shifted the conversation to President Trump’s 2016 election victory over Hillary Clinton.

Guthrie asked, “When you look at the 2016 election and you look at how, relatively speaking, it was decided by a handful of votes in a few states, do you think it’s possible that Russia’s election interference actually worked?”

“It actually elected Donald Trump over Hillary Clinton?” she added.

Rice cut right through it when she replied, “I don’t think there’s any evidence of that.”

“And, you know, I really don’t think that’s a good conversation to have,” she continued. “I think that really does devalue the people in Wisconsin and Michigan and others who decided to vote for President Trump.”

Related Article: Hillary Clinton Explains What It Takes To Be A ‘Gutsy’ Woman, Juanita Broaddrick Reacts: ‘Give Me A Damn Break, Hilly’

Condi’s response to whether Russia elected Donald Trump is absolutely worth a listen.
pic.twitter.com/Uwzieb8M7X