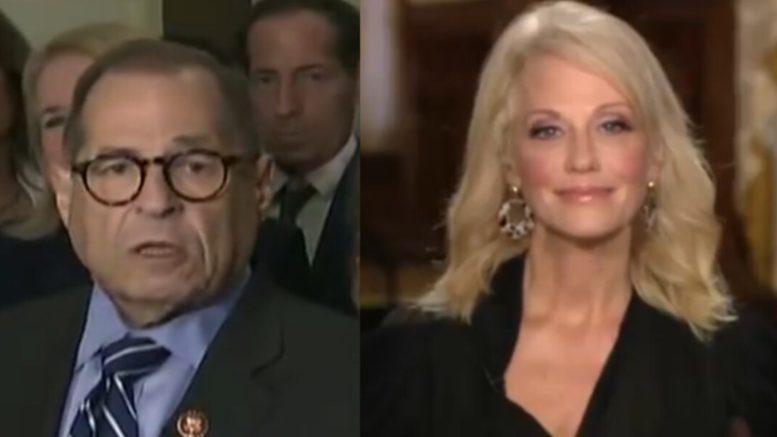 House Judiciary Democrats on Thursday ramped up their “Trump impeachment push” after returning from their August recess, as they “set the ground rules for a formal committee inquiry,” but Republicans, however, called out the Democrats effort to move the needle and “change the rules” before the committee voted.

White House counselor to the President, Kellyanne Conway, spoke with Bill Hemmer on “Fox News Sunday” where she weighed in on Democrats’ “impeachment” effort dismissing it as “complete nonsense.”

“Complete nonsense,” Conway expressed. “Even Jerry Nadler said impeachment’s just a term. This is a process. They need to get a messaging meeting and they need to read the Constitution, the Democratic Party.”

Last week, Nadler said that his committee’s activity “has been an impeachment inquiry,” only for House Majority Leader Steny Hoyer, D-Md., to say there was no inquiry. On Friday, Nadler himself pulled back on his language, telling CNN’s Chris Cuomo, “It is not necessarily called an impeachment inquiry. That’s a made-up term without legal significance. It is, however, what we are doing,” as reported by Fox News.

“Americans, the Congress work for you, they work for you and they’re wasting your money and their time on trying to impeach a President where there are no high crimes and misdemeanors,” Conway said. (Continued Below)

(Related:  During The Hearing, Rep. Ratcliffe RIPS Mueller For Failing To Follow DOJ Policy: ‘It Was Not [Your] Job To Determine Trump’s Innocence’)

“So they work for you. Tell them to vote on the USMCA, get that trade deal done. Tell them drug pricing, infrastructure, keep this great economy humming along, and stop the nonsense of harassing and embarrassing this president and the people around him, when you have no constitutional or legal basis to do so.” (Video Below)