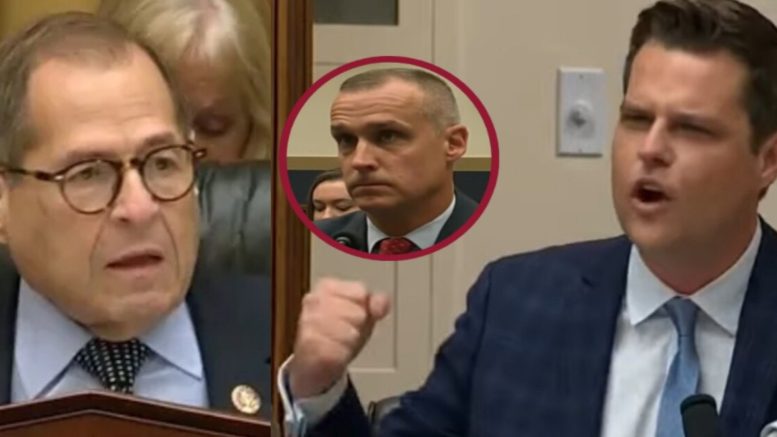 Former Trump campaign manager Corey Lewandowski testified before the House Judiciary Committee Tuesday regarding Chairman Jerry Nadler’s “impeachment effort” over President Donald Trump’s “potential obstruction of justice”. The White House, however, ordered Lewandowski not to speak about any conversation with the President or senior presidential advisers that were not mentioned in former special counsel Robert Mueller’s report, according to White House counsel Pat Cipollone.

During his five minutes of questioning Lewandowski, Rep. Matt Gaetz (R-FL) ripped Nadler after the Inspector General released a scathing report on former FBI Director James Comey. The IG stated that Comey “violated standard procedures” during his time in the Trump administration and set a “dangerous example” after “leaking material to the press.”

“The Mueller report was supposed to be the ‘end all- be all’, the ‘great groundswell of impeachment’ insuring that Americans would want to tar and feather the President, run him out of Washington on a rail, deprive the American people of the duly elected President that they elected,” Rep. Gaetz began in his opening. “That didn’t turn out to be the case.”

He explained Democrats’ next move was to bring in the Attorney General who was “Certainly going to point out the inconsistencies and flaws in the analysis.” Gaetz added, “Well, that didn’t happen, because the majority wanted to insist that their ‘unelected staff’ ask questions of the Attorney General of the United States.”

Then, he pointed out that Democrats tried in court to continue their efforts and mocked them after they claimed they are “winning,” adding, “They’re not winning in court. [Don McGhan and Bill Barr] are not here. It’s a joke.”

Gaetz described how the committee Democrats don’t know what path they are on as several of them have claimed they are not in an “impeachment inquiry.” He proceeded to read off a list of Democrats’ statements to prove his point. (Continued Below)

“This process has been about as clear as Joe Biden’s last answer to race relations that involve turning on the record player. We don’t know where we are or what we’re doing,” the Florida Congressman expressed.

He went on to tell Lewandowski that he is not allowed, by House rules, to impune the motives of his colleagues or speculate what “might be animating the bizarre circumstance”, but added the rules don’t apply to the former Trump campaign manager.

“Do you have a thought as to why we continue to engage in a charade that is overwhelmingly opposed by the American people and fundamentally misunderstood by my Democratic colleagues?” Gaetz asked of him. (Continued Below)

Lewandowski replied, “No Congressman, I think they hate this President more than they love their country.”

“Mr. Lewandowski, you were the campaign manager when the Obama-Biden administration was notified that there might be efforts by the Russians to interfere in our election? Gaetz then asked, to which Lewandowski said, “Yes.”

Asked if he could describe the briefing that he got as the campaign manager to ensure that our system was resilient and American democracy was protected, Lewandowski responded, “There was no briefing provided by anybody from the Obama-Biden administration, members of the intelligence community, or the FBI to our campaign when I was present, or during my tenure as a campaign manager.”

“That’s just baffling to me. I mean our democracy is so precious, we have to cherish it,” Gaetz responded sarcastically. “We have to protect it. And yet, when the Obama-Biden administration knew that there might be a nefarious effort to interfere or to co-opt or anyway disturb our democracy, they didn’t say anything to you.”

“As you sit here today and watched these facts unfold, do you have any rationale as to why maybe the Clapper, Brennan, Comey, Obama-Biden team didn’t want to give the Trump campaign a fair defensive briefing about the threats that we were facing?” Gaetz asked.

“It’s actually unfathomable to me that they didn’t contact a major political nominee for President of the United States and inform them of potential threats against the election process in 2016,” Lewandowski said. (Continued Below)

“And we could be finding that out now. We could have those people before our committee to figure out what in the world happened that didn’t allow us to get those answers. One final question for you, Mr. Lewandowski. Has an Inspector General employed by the United States government ever accused you of breaking the law?” Lewandowski said, “No.”

Gaetz fired off: “No! But they have done that with James Comey. And yet, the leadership of this committee will not bring James Comey before, even though the Inspector General said that his work impaired the credibility and efforts of over 35,000 FBI agents and the brave people fighting for our country.”

“It’s a shame that you’re here Mr. Lewandowski. Jim Comey should be sitting in that chair! He should be answering questions about why he did so much damage to the FBI and our country, including not giving you the briefing that you are entitled to,” he declared. [Emphasized]

(Related: Nadler Accuses Rep. Gaetz Of ‘Wasting Committee Time’, Gaetz Fires Back: ‘We Will Take No Lecture From You’)