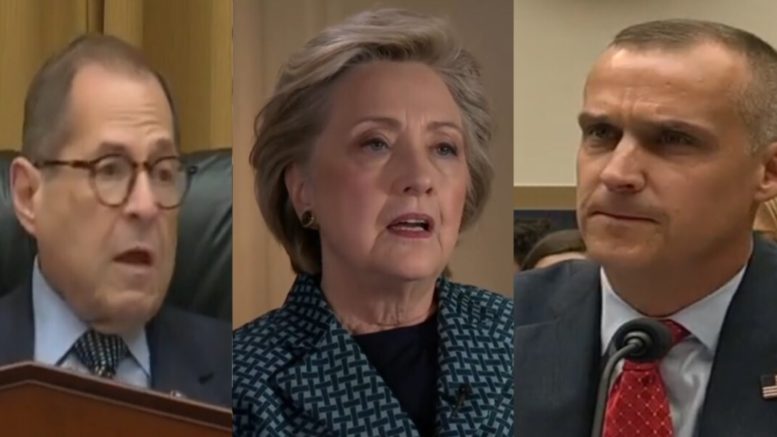 Former Trump campaign manager Corey Lewandowski testified before the House Judiciary Committee Tuesday and ripped former Secretary of State Hillary Clinton during his opening statement declaring that he didn’t delete his emails. He further warned Congress not to go down “rabbit holes.”

The Daily Caller reported, Lewandowski testified before the House Judiciary Committee Tuesday regarding an impeachment inquiry about President Donald Trump’s potential obstruction of justice. The White House ordered him not to speak about any conversation with the president or senior presidential advisers that were not mentioned in former special counsel Robert Mueller’s report, according to White House counsel Pat Cipollone.

Lewandowski started his opening by expressing “his hope” that the hearing “will be productive in revealing the truth, both to the committee and to the American people.”

“For the record, and as you likely know, I’ve already testified before Congress on 3 separate occasions. I sat at length with the staff with the special counsel’s office. There too, my time and answers were given freely and without hesitation. I think in one form or another, I’ve already answered well over 20 hours,” Lewandowski said. “So now here I am before the House Judiciary Committee to answer the same questions again.”

He acknowledged that the Judiciary Committee changed the rules last week to start and “impeachment proceeding” adding that it is “very unfair.”

Lewandowski summarized his role during his tenure of Trump’s first campaign manager: “My job was simple: provide Mr. Trump with my best advice, spend his money like it was my own and give him the support he needed to win. I also set long term objectives and managed the day to day decisions.” (Continued Below)

He noted President Trump secured the Republican nomination and ultimately won the Presidential election, then pointed out, “However, since election day, whether it was bad actors at the FBI and the intelligence community or lies coming from members of the current House majority, that there was evidence of collusion, the American people continue to be sold a false narrative with the purpose of undermining the legitimacy of the 2016 election results,” the former Trump campaign manager said.

Lewandowski explained that running a national campaign expanded to all 50 states and that there were competing interests for the candidates time where he received a “sea of ideas”, noting many were “dismissed out of hand” and other ideas were passed onto staffers to be handled.

“I also received hundreds of thousands of emails, some days with as many as a thousand emails,” Lewandowski told lawmakers. “And unlike Hillary Clinton, I don’t think I ever deleted any of those. Many of them were responded to with either one-word answers or forwarded to other staffers for followup.” [Emphasized]. (Continued Below)

“Mr. Trump held no elected position, he was not a government official. Rather, the Obama- Biden administration and the intelligence community, overseen by James Clapper, Jim Comey, and John Brennan had the ‘responsibility’ to the American people to ensure the integrity of the 2016 election. I’ll leave it to this committee and the American public to decide how successful or not they were in doing their jobs,” he continued.

“Regardless, as the special counsel determined, there was no conspiracy or collusion between the Trump campaign and any foreign governments either on my watch or afterwards,” Lewandowski said. “Not surprisingly after the Mueller report was made public, interest in the fake Russia collusion narrative has fallen apart.”

“In conclusion, and it’s sad to say, this country has spent over three years and 40 million taxpayer dollars on these investigations, and it’s now clear that the investigation was populated by many Trump haters who had their own agenda — to take down a duly elected President of the United States. As for actual evidence of collusion or conspiracy, there was none. What there has been, however, is harassment of this President from the day he won the election,” Lewandowski expressed.

“We as a nation would be better served if elected officials like yourself concentrated your efforts to combat the true crisis facing our country as opposed to going down ‘rabbit holes’ like this hearing. Instead of focusing on petty and personal politics, the committee could focus on solving the challenges of this generation. Imagine how many people we could help or how many lives we could save,” he concluded. [Emphasized]. (Continued Below)

(Related: Rep. Collins Exposes Why Dems Aren’t Cutting Right To An Impeachment Vote: ‘You Don’t Have The Votes!’)