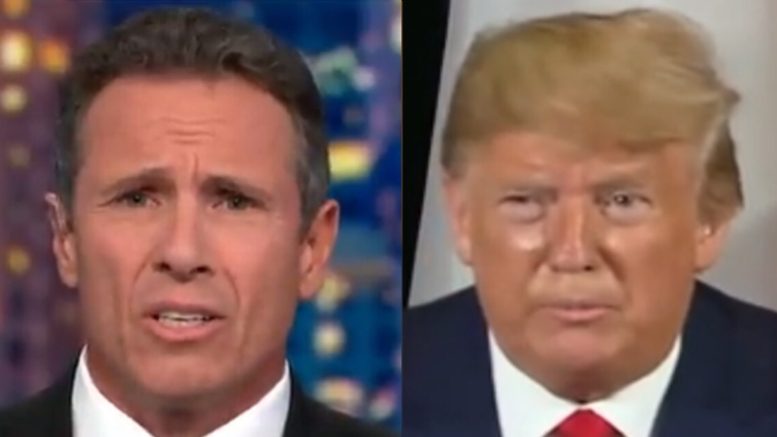 The conversation President Trump had with Zelenskiy reportedly centers around former vice president Joe Biden and if proven to be true, could put a major dent in Biden’s campaign.

He raised questions about the activities of former Vice President Joe Biden’s son Hunter, who worked for a Ukrainian gas company and during the interview and called out host Chris Cuomo and his network for not covering the story.

“Motive: the kid was under investigation, be[cause] he had gotten 6 billion dollars from the most crooked Ukranian oligarch. You don’t cover corruption against Democrats the way you do Republicans,” the President’s attorney explained.

“You are totally biased! It is sad to watch what happened to you. You are a sellout! These are crimes of major proportions and because they’re Democrats, you won’t cover it. Your corrupt media won’t cover it, because he’s a Democrat! You are standing up for two systems of justice,” Giuliani told Cuomo. “Joe Biden can be involved in bribery. Joe Biden’s son can get 1.5 billion dollars from China and you won’t cover it! And I urged the Ukranian government to investigate corruption. Well, I did and I’m proud of it.” (Continued Below)

On Monday, a reporter asked President Trump if he was satisfied with the way Rudy Giuliani has been handling the Ukraine story.

“I think he was excellent, I watched him the other night. I haven’t watched that show in a long time. I don’t watch CNN because it’s fake news,” the Commander in Chief stated.

“But I watched Rudy take apart ‘Fredo’. Fredo’s performance was incompetent, Rudy took him apart. The press doesn’t give him credit because they take little tiny snippets whenever Rudy was a little bit– if he mispronounces a word, they’ll show that. Rudy Giuliani took ‘Fredo’ to the cleaners! First time I’ve ever watched CNN in a long time, I hate to watch it, [be]cause it’s so fake,” the President expressed. (Continued Below)

In August at an event in New York, Chris Cuomo went off after a man called him “Fredo.”

The man said, “I thought that’s who you were,” while Cuomo replied, “No, punk ass b**ches from the right call me ‘Fredo.’ My name is Chris Cuomo. I’m an anchor on CNN. ‘Fredo’ is from The Godfather. He was the weak brother.”

Cuomo claimed that the word is an “insult” to the Italian people and “it’s like the N word for us,” then he threatened the other man saying, “I’ll f***in ruin your shit. I’ll f***ing throw you down these stairs.”

President Trump’s 2020 campaign took note of Cuomo’s meltdown and immediately branded a “Fredo Cuomo Unhinged” teeshirt that is available for sale at the Trump campaign store.

President Trump posted the video of Cuomo “going off” after being called “Fredo” and wrote, “I thought Chris was Fredo also. The truth hurts. Totally lost it! Low ratings @CNN”

The Commander in Chief added, “Would Chris Cuomo be given a Red Flag for his recent rant? Filthy language and a total loss of control. He shouldn’t be allowed to have any weapon. He’s nuts!” (Video Below)

Rudy Giuliani calling out Chris Cuomo for not covering Biden’s involvement in Ukraine and China: