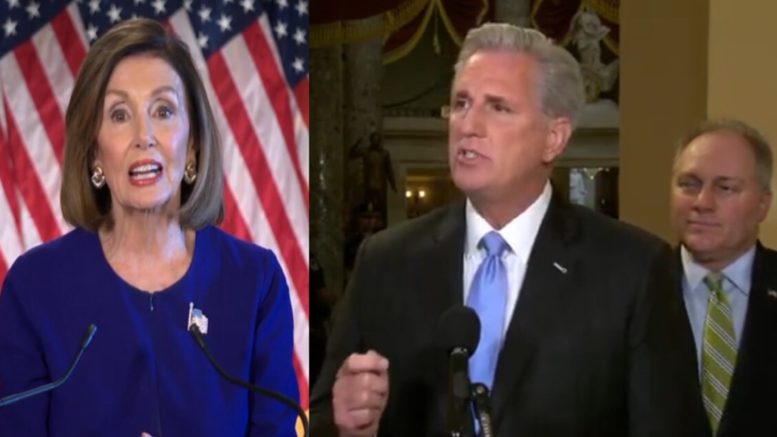 House Speaker Nancy Pelosi (D-CA) formally announced on Tuesday that she is moving forward with an “impeachment inquiry” into President Trump claiming “the President must be held accountable” for his “betrayal of his oath of office, betrayal of our national security, and the betrayal of the integrity of our elections.”

Pelosi specifically charged that the White House had violated the law by not turning over a whistleblower complaint concerning Trump’s July call with Ukrainian President Volodymyr Zelensky. Trump allegedly pushed Zelensky to investigate former Vice President Joe Biden and his son Hunter. The president vowed Tuesday to release a transcript of his call with Zelensky, as reported by Fox News.

“This week, the President has admitted to asking the President of Ukraine to take actions which would benefit him politically,” Pelosi claimed. “Therefore, today, I’m announcing the House of Representatives is moving forward with an official impeachment inquiry. I’m directing our six committees to proceed with their investigations under that umbrella.”

“The President must be held accountable,” she continued. “No one is above the law.”

(Related: Trump Humiliates Cuomo While Revealing Why He Watched CNN Over The Weekend: ‘Rudy Giuliani Took Fredo To The Cleaners’)

“Our job here is a serious job. Our job is to focus on the American public,” Rep. McCarthy explained. “Our job is to make tomorrow better than today.”

“Our job is to legislate, not to continue to investigate something in the back when you cannot find any reason to impeach this President,” he pointed out.

“This election is over,” he emphasized. “I realize 2016 did not turn out the way Speaker Pelosi wanted it to happen. But she cannot change the laws of this Congress. She cannot unilaterally decide we’re in an ‘impeachment inquiry. What she said today made ‘no difference’ of what’s been going on. It’s no different than what [Jerry] Nadler’s been trying to do. It’s time to put the public before politics. Thank you.” (Video Below)

Rep. McCarthy also tweeted, “Democrats have wanted to impeach President @realDonaldTrump from Day 1. They just couldn’t bear the results of the 2016 election.”

Democrats have wanted to impeach President @realDonaldTrump from Day 1. They just couldn’t bear the results of the 2016 election.

The GOP Leader added, “Facts be damned. Democrats are insisting this is their moment to impeach President Trump. Speaker Pelosi’s decree changes nothing.”

Facts be damned. Democrats are insisting this is their moment to impeach President Trump.