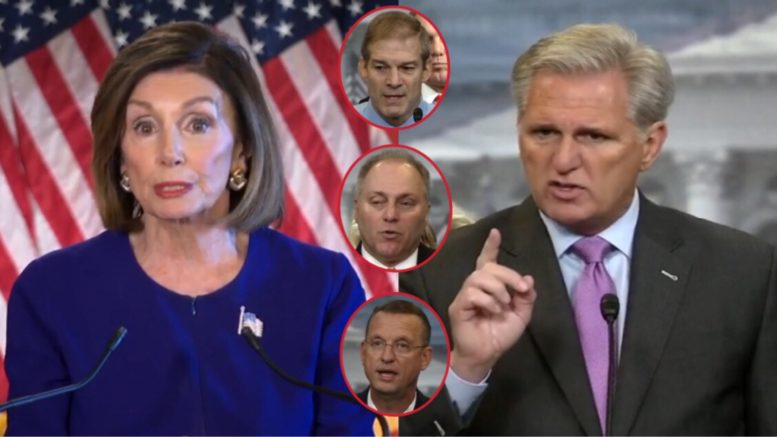 As promised, the White House released a transcript on Wednesday of President Trump’s phone call in July with Ukranian President Volodymyr Zelensky detailing that he sought a review of former vice president Joe Biden’s family dealings in the country, however, the document does not show that President Trump leveraged military aid as part of a quid pro quo, debunking what Democrats claimed.

House Republican Leader, Kevin McCarthy (R-CA) held a press briefing with GOP leaders and slammed Speaker Nancy Pelosi, calling on her to apologize to the nation after she mislead Americans on Tuesday.

The document, declassified by Trump a day earlier, indicates that the call – which Trump made from the White House residence — took place July 25 from 9:03 a.m. to 9:33 a.m. A notation on the memo says it does not represent a “verbatim transcript” but is based on “notes and recollections” of those listening and memorializing the call. It is still presented in transcript form, as reported by Fox News.

Before the transcript’s release, President Trump was accused by Democrats of essentially pressuring a foreign power to investigate a political opponent. Further, the conversation led to a whistleblower complaint against the President, provoking an avalanche of impeachment calls from Democrats.

On Monday, it was reported that Trump had even ordered his staff to freeze nearly $400 million in aid to Ukraine a few days before the phone call with Zelensky, a detail that fueled impeachment calls and led House Speaker Nancy Pelosi to announce a formal impeachment inquiry Tuesday. But the call transcript does not show Trump mentioning the aid as a bargaining chip or otherwise — though Zelensky did appear to reference military aid early in the call, when he thanked Trump for “great support in the area of defense,” as per Fox News.

President Trump denied wrongdoing and has repeatedly referred to the impeachment push as a partisan witch hunt. “Will the Democrats apologize after seeing what was said on the call with the Ukrainian President? They should, a perfect call – got them by surprise!” the President tweeted Wednesday. (Continued Below)

Rep. McCarthy said on Wednesday, “I just watched the Speaker yesterday demean the office of the Speakership. I understand members when they want to be political, but the power of the Speaker is a much different place to be. I listened to the Speaker claim that the President ‘violated the law’ based on nothing that she had read– based upon a whistleblower that wasn’t even listening to a conversation– with an IG saying that the whistleblower has a political bias.”

“Make no mistake, yesterday was a dark day for America. It was a dark day for the rule of law that the Speaker of the House would claim a President violated the law without ever having any information to judge it on. It was a dark day for national security– that you are willing to jeopardize the national security of our country today and in the future because of your own policial bias. Name me one world leader, regardless of who sits in the oval office of how honest of a conversation they are gonna have if they’re fearful of the transcripts are gonna become public to the world,” McCarthy said. [Emphasized]. (Continued Below)

“It was a dark day for the rule of law that the President is going to be held guilty without any proof in the process. It’s a dark day for the rule of law when we watch a former vice president tell the public that he did quid pro quo– that he told another country he would hold up a billion dollars if they would not fire a prosecutor that was looking at his own son. If they did not fire him in 6 hours, he was leaving,” the GOP Leader explained.

“It is a dark day for the Congress, for the actions of this Speaker, but more importantly, for the action of this majority party. They promised the America public they’d be different and they have not,” he continued.

“I’m not speaking to you as a Republican Leader, I’m speaking to you as an American that’s disgusted with was has taken place by the Speaker of the House and the action of this majority party, who’s only driven because they did not like the outcome of a 2016 election. It is time to put people before politics. … time to run by the rule of law. …. time to uphold that you look at the evidence before you judge whether somebody is guilty. … It is time to stop putting the America public through this nightmare,” McCarthy expressed.

“The Speaker of the House, the individual who’s in line to be President, if something happens to the President or Vice President, claims [there is] a ‘violation of the law’– based upon a whistleblower of facts she never read, and a whistleblower that was not even on the phone call. Now the President of the United States is being put in a position that no other President in the history of this country has to do– that he is going to release a transcript of a conversation, with another world leader, so the entire world can see it. Simply because they want to impeach him,” McCarthy fired off.

“This Speaker that claims the President ‘violated’ also nominated Adam Schiff, the Congressman of our intel committee, that is a gathering for national security– the same individual, Congressman Adam Schiff, who had lied to the American public for the last two years, who looked into a camera and said ‘he had proof beyond circumstantial evidence’. Well, you know what? We spent millions of dollars, more than a year. We went around the world… and they found that was a lie. But he’s still sitting at the helm of a Chairmanship dealing with national security,” he explained.

“At the same time he sits there, she listened to a vice president in his own words say that ‘yes, he did hold up money to Ukraine unless they would fire a prosecutor’, that worked for Ukraine, that was looking after his son’s activities.” McCarthy declared. “Not one word about that. I think what the Speaker did was a dark day, not only for this institution but for the rule of law, and she put this country in harm’s way when it comes to national security and our view around the world.”

“At the exact same time, the Leader of our country is sitting at the UN meeting with other world leaders … and [Pelosi says] she’s gonna do a press conference, all day long, to say what’s gonna happen with ‘impeachment’, and she claims he violated the law, with no proof, with no information– simply the fact that she does not like the outcome of the election. That questions her ability to even be Speaker, in my eyes!” he proclaimed. [Emphasized]. (Video Below)

“In the end, it will make the actions less safe by this Speaker,” McCarthy noted. “What I’m concerned [about] now is the Speaker of the House changed the course of that office for the history of this country. … I think the Speaker owes an apology to this nation, and I think, it’s even in question why she should stay in her job. We are done with this,” the House GOP Leader expressed. [Emphasized].

Full remarks by GOP Leaders; Rep. McCarthy’s statement begins at 10:00 into the video: