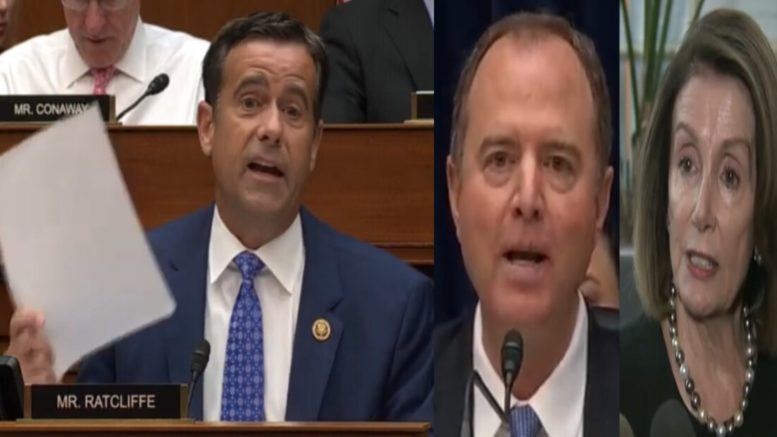 On Thursday, Rep. John Ratcliffe (R-TX), questioned Acting Director of National Intelligence Joseph Maguire during a House Intelligence Committee hearing about a whistleblower complaint centered on a phone call between President Donald Trump and the President of Ukraine.

The whistleblower complaint, however, was released to the public right before the hearing started and it alleged that President Trump used the “power of his office to solicit interference” from a foreign country in the 2020 election — and that White House officials subsequently tried to “lockdown” records of that phone call.

The transcript of the July call, between President Trump and Ukrainian President Volodymyr Zelensky, was released Wednesday by the White House. It confirmed that President Trump sought an investigation from Ukraine into the Biden family, though it did not show the President explicitly leveraging U.S. aid as had initially been suggested in media reports and by Democrats.

Ratcliffe explained that after Maguire served in the Navy for 36 years, commanded on Seal Team 2 and retired as Vice-Admiral of the Navy. He became the Acting Director of National Intelligence 23 days after the Trump/Zelenksy phone call and four days after the whistleblower made his or her complaint, and then he was subpoenaed before the House Intelligence Committee after being accused of committing a crime.

The Texas Congressman said, “Chairman Schiff wrote a letter on September 13th accusing you of being in an ‘unlawful coverup’, and then the Speaker of the House took it one step further. She went on national tv and said not once, but twice, that you broke the law, that you committed a crime. She said, ‘The Acting Director of National Intelligence blocked him, meaning the ICIG, from disclosing the whistleblower complaint. This is a violation of the law.'”

“You were publicly accused of committing a crime, you were also falsely accused of committing a crime, as you have so accurately related. You were required to follow, not just an opinion of what the law says, but the opinion from the justice department– an 11-page opinion about whether or not you were required by law to report the whistleblower complaint, correct?” Ratcliffe asked Maguire, to which he said, “That was correct.” (Continued Below)

“And that opinion says, ‘The question is whether such a complaint falls within the statutory definition of urgent concern that the law requires the DNI to forward to the Intelligence Committee. We conclude that it does not. Did I read that accurately? I better have right? That’s an opinion not from Bill Barr. That’s an opinion from the Department of Justice ethics lawyers, not political appointees, but career officials that serve Republicans and Democrats. The ethics lawyers at the Department of Justice that determined that you did follow the law,” Ratcliffe continued.

“So you were publicly accused, you were also falsely accused, and yet, here today I haven’t heard anything close to an apology for that. Welcome to the House of Representatives with Democrats in charge,” the Texas Congressman expressed.

“And to that point, despite good faith, the whistleblower is, in fact, wrong in numerous respects,” Ratcliffe said.

“Those sources happen to include mainstream media. The sources that the whistleblower bases his complaints on include the Washington Post, The New York Times, Politico, The Hill, Bloomberg, ABC News, and others. In other words, much like the ‘Steele dossier’, the allegations in the whistleblower’s complaints are based on ‘third-hand’ mainstream media sources, rather than first-hand information,” he said.

“The whistleblower also alleged crimes not just against the President but says with regard to this scheme to solicit inference from a foreign country in the 2020 election that ‘The president’s personal lawyer Mr. Rudoplh Guiliani is a central figure in this effort and Attorney General Barr appears to be involved as well.’ But buried in a footnote, a couple of pages later, the whistleblower admits, ‘I do not know the extent to which if at all, Mr. Guiliani is directly coordinating his efforts on the Ukraine with Attorney General Barr,'” the Texas Congressman read. (Video Below)

He then noted that the Attorney General does know because he issued a statement on Wednesday saying ‘there was no involvement.’

“My point in all of this is again, the transcript is the best evidence of what we have and so that the American people are very clear what that transcript relates is legal communications. The United States is allowed to solicit help from a foreign government in an ongoing criminal investigation, which is exactly President Trump did in that conversation. So if the Democrats are intent on impeaching the President for lawful conduct, then be my guest,” Ratcliffe concluded.

(Related:  Nunes Rips The Left At Thursday’s Hearing, Calls Out Schiff For Trying To Get Nude Pics Of Trump)