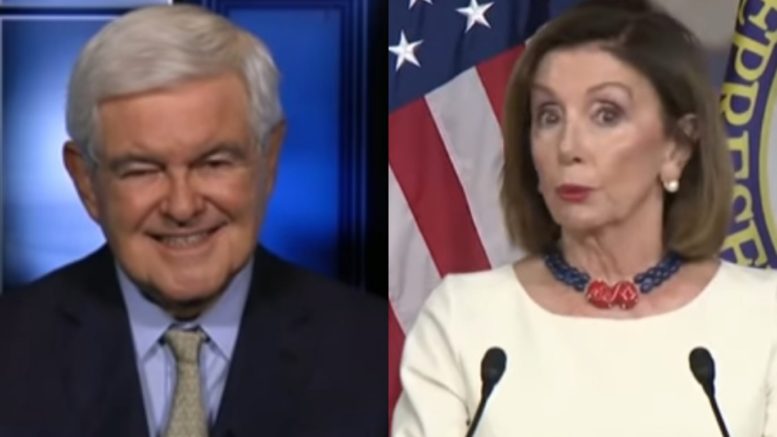 Newt Gingrich joined Tucker Carlson on Thursday evening to discuss why he thinks it was an overall “bad decision” by House Speaker Nancy Pelosi to announce a formal impeachment inquiry due to initial fallout from the “whistleblower” drama, especially when she didn’t have all of the facts.

Newt said unlike when President Clinton was impeached, Democrats don’t have a very strong hand to show President Trump is guilty of any kind of actual crime. And he thinks Democrats are basing their decision to impeach the President on emotion rather than actual evidence of crimes committed.

Newt suggested what Democrats are doing “makes no sense at all” and will probably end up “politically being very damaging.”

Related Article: Gowdy Slams Schiff For ‘Making Stuff Up’ At Thursday’s Hearing: ‘If You Don’t Have Good Facts, You Gotta Make Them Up’

When stating what he believes is the root cause of the impeachment push, Newt said, “The left wing of the Democratic Party and the New York Times wakes up every morning and says, ‘We know Donald Trump’s done something terrible. I wonder what it is.’ And so the momentum, the morale, the excitement, and every single story becomes the next opportunity, the next breakthrough.”

“And this one (whistleblower story), of course, verges on Saturday Night Live of being pathetic,” Newt declared. Video Below

Gingrich then slammed Nancy Pelosi for “running out to hold a press conference when she has not read the transcript, she has not interviewed the so-called whistleblower, she has no idea what the facts are, but it’s the momentum emotionally of where they’re at.” And he thinks it’s very hard for Democrats to back off the fact that they “hate Trump.”

To sum it all up, Newt said, “What happened this week is they (Democrats) got overly excited, they decided to do something truly stupid, and — I’ve said over and over again — I think what Pelosi has done is destroyed Biden’s candidacy,” which he doesn’t believe Biden can “survive it.”