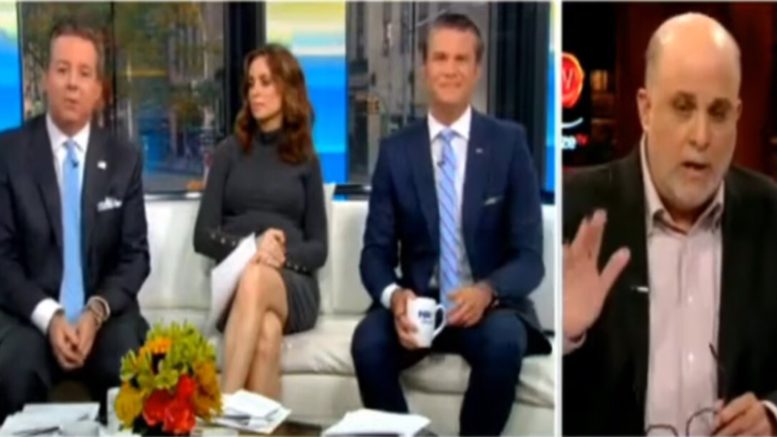 Sunday morning on Fox News’ “Fox & Friends”, Mark Levin, “the great one”, pushed back at co-host Ed Henry on the subject of President Trump’s phone call with Ukranian President Volodymyr Zelenksy and the so-called “whistleblower”.

Levin also blasted Democrats for their renewed efforts to impeach the President, and also slammed the media for covering for former vice president Joe Biden.

“You know Ed, I’ve been watching you and a lot of reporters and you haven’t once asked for the identity of the so-called whistleblower. Why is that? Who’s asking for it? I’m an American citizen. If this CIA operative is gonna bring the guy that brings down my President, I want to know all about him. I want to know what kind of dog’s they have. How many marriages they’ve had, if they have a DUI. I want to know if they’re a partisan, I want to know everything– like they do with everything else, the media. I want to know… this guy should be crossed examined,” Levin expressed.

“What kind of situation is this? We’re gonna bring down a President of the United States and the Democrats are telling us we can’t identify this guy [be]cause his life might be in danger? And then, everybody swings around his memo like it’s the bible! I have a lot of questions about his memo. I don’t need press people interpreting it for me, I can read it myself,” he continued.

“Why is that the CIA changed its whistleblower policy in August when this letter is dated August 12th? Under the former policy before August, he’s not a whistleblower, this isn’t a whistleblower complaint– and nothing sent to the United States Congress. How did that happen like this?” Levin asked.

Ed Henry asked Mark Levin if he thought President Trump did anything “illegal” during his call with President Zelensky. “What happened in the Oval Office on that call? Was it illegal or not?” he asked. (Continued Below)

“You know how I know? Because Nancy Pelosi has been on every tv show and she can’t cite one section of the United States code where it’s illegal. My question is: why is Joe Biden above the law? Why is his son above the law? Where’s Hunter Biden today? Where’s the media? Don’t they want to know? Don’t they want to know if the leading contender for the Democrat nomination is a crook? And if his son is a crook?” Levin wondered.

Henry tried to get back on topic and asked, “So you’re okay with a President asking another president to ‘dig up dirt’ on a candidate?” (Continued Below)

Levin asked, “What dirt are you talking about? Your question is not honest!” He repeatedly objected as Henry invoked the relevant portion of the Trump-Zelensky transcript and said its not a “trick question.” [Emphasized].

(Related: Levin Holds Up The Whistleblower’s Statement & Points Out Multiple Suspicious Aspects Of It)