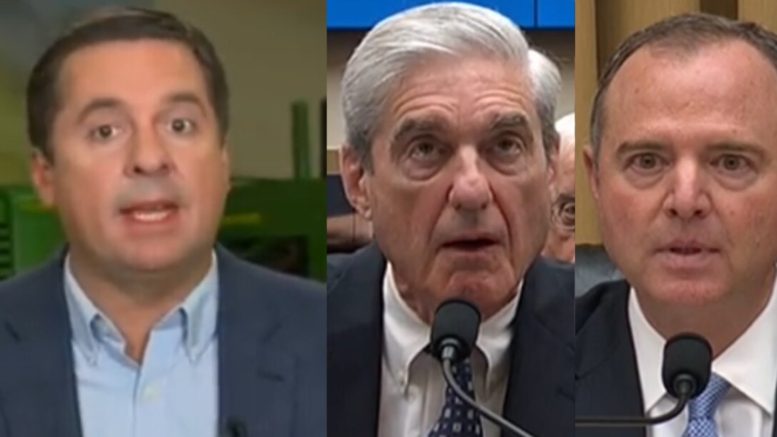 He also weighed in on the Chairman of the Intel Committee, Adam Schiff (D-CA), who admitted during his opening statement Thursday, that it was a “parody.”

“So many around the country have sent me the pictures of myself and John Ratcliffe as [Schiff] is saying that. We’re thinking to ourselves, ‘Wait a second! This isn’t what happened. And then like 30 seconds later, all my colleagues, you can catch it on some of the film– we’re sitting there laughing. This guy just made all this up. He just fabricated a story. It’s unbelievable,” Rep. Nunes explained when asked about the Chairman’s “fabricated story.”

Asked if he has seen Congress make up a fictional story as Democrats are adamant about “getting to the bottom” of what happened, Nunes responded, “By their own admission, it’s not serious, because later they called it a parody. So the definition of parody is it has to be a comedy. By their own definition, they’re not serious. This whole thing is not serious, this is some kind of concocted plan that they have to drive quickly towards impeachment. That’s what they’re using this for.”

And hopefully the American people… they saw through the Russia hoax, this is the sequel. It’s like the ‘bad Ukrainian hoax’, and I don’t think it’s gonna be better than the Russia hoax,” the California Congressman expressed.

Ed Henry announced that Ukraine’s former prime minister said that “he believes former vice president Joe Biden’s business dealings should be investigated,” and he asked Nunes, “Do you think Adam Schiff and others are trying to distract from that story? And how do you plan as the top Republican on the intel to get to the bottom of all that?” (Continued Below)

Nunes explained that he has “long been interested” in the origins of the Russia hoax. “It all begins and ends in Ukraine,” he revealed. “I say this because if you go back to the Steele dossier, this is the ‘Clinton-paid for dirt'”.

“Now remember, we may have to bring Bob Mueller out of retirement here. Because Bob Mueller looked at all this. He knew that the Clinton campaign, Christopher Steele, Fusion GPS, other DNC contractors, like [Alexandra] Chalupa, those are all Democrats, those are all Americans, except for one Brit. They all got that information from the Ukrainians,” he added. [Emphasized]. (Video Below)

“It must be a crime,” Nunes declared of the Democrats getting information previously from Ukraine. “Where the hell is Bob Mueller when we need him? Because he needs to come back and prosecute the Democrats first, then he can after Trump.” [Emphasized]

(Related: Graham: ‘I Have Zero Problems With This Phone Call, But I Do Have A Problem With Nancy Pelosi’)