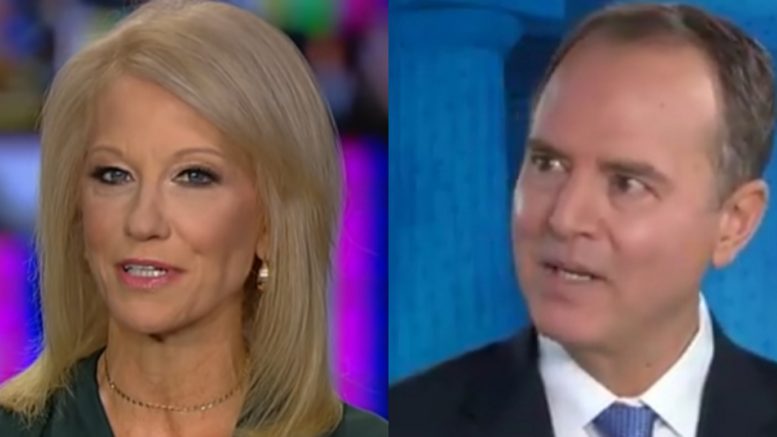 While joining Maria Bartiromo on Sunday, Kellyanne Conway briefly veered off topic to slam House Intel Chairman Adam Schiff and his handling of the “impeachment inquiry” into President Trump.

Kellyanne was discussing fallout from Joe Biden’s connection to dealings involving his son, Hunter, with Ukraine and China and how bad it’s impacting his campaign.

Kellyanne said she thinks Biden is showing signs of desperation to stay on top of the polls by calling for Trump’s impeachment, which she labeled as an “absolute disgrace.”

“What I think is going on with impeachment, though, is an absolute disgrace,” Kellyanne said.

“Why doesn’t he come out into the open?” Kellyanne asked. “And I want Adam Schiff under oath every time he talks from now on because he does what liars and cheaters do all the time when they don’t have the facts on their side. They lie and they cheat.”

“He lied to the American people. He has no credibility,” she declared. “One hundred Republicans have called for his censure. They don’t have the faith that he can be impartial here, and neither do we.”