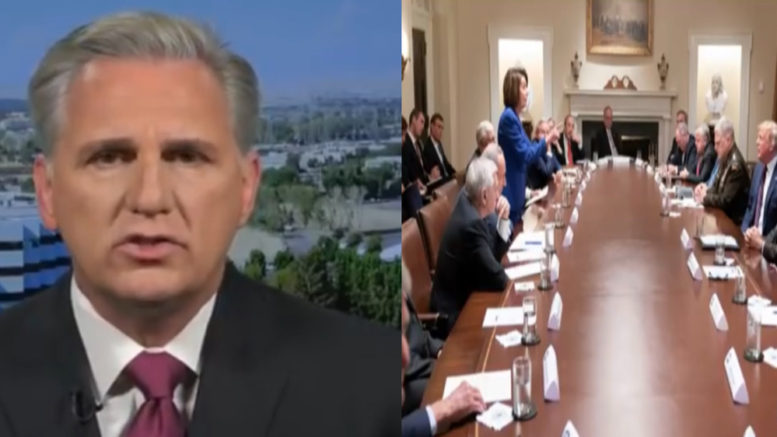 The White House, on Wednesday, invited lawmakers of both parties and chambers of Congress to discuss President Trump’s decision to withdraw U.S. troops from northern Syria. Senate Minority Leader Chuck Schumer (D-NY), however, told reporters that the President “had a “meltdown” and called House Speaker Nancy Pelosi (D-CA) a “third-rate politician” during the meeting, to which, they stormed out.

House Minority Leader, Kevin McCarthy (R-CA), was also at the meeting and spoke with host Maria Bartiromo on Fox News’ “Sunday Morning Futures” where he revealed what took place.

“I’ve been in many of these meetings; this is a pattern of the Speaker. When she doesn’t want to come to a solution, she really is unbecoming of a Speaker, throws a fit and then leaves the room,” Rep. McCarthy said. “That’s not a sign of a leader. A leader stays in the room and solves the problem.”

The House Minority Leader explained what happened at the very beginning of the meeting: “The President starts the conversation, and this a bipartisan, bicameral meeting, and he’s handing a letter out, that is a letter he sent to the President of Turkey, Erdoğan, about not entering that area, about protecting the Kurds. As each elected official gathers that letter, they start to read it. [Then] they pause as it’s something they have not seen before.”

McCarthy said that Speaker Pelosi turned over the letter, and set it right down on the table to make a point to the President that “she’s not going to listen to him.”

“And what’s creeping into all of this is ‘impeachment’. She couldn’t put that aside for one moment to talk about the security of an issue, that should be one person that we’re all speaking together, with one voice. But it was impeachment. And if you watched her and Senator Schumer, they said the exact same thing over and over until they felt they were at the moment that on their own script, they were supposed to get up and walk away,” he continued. (Continued Below)

“And the dirty little secret here, Maria, is the other Democrats stayed in the room and we had really a productive, normal meeting,” McCarthy revealed.

“The only common denominator that disrupted this all was the Speaker of the House,” he added.

On Wednesday, McCarthy told reporters Pelosi’s behavior is “unbecoming” and criticized her for storming out. “The Speaker tries to make everything political,” he said. (Video Below)

(Related: Trump Gets The Last Laugh After Chuck & Nancy Storm Out Of WH & Tell Reporters He Had A ‘Meltdown’)