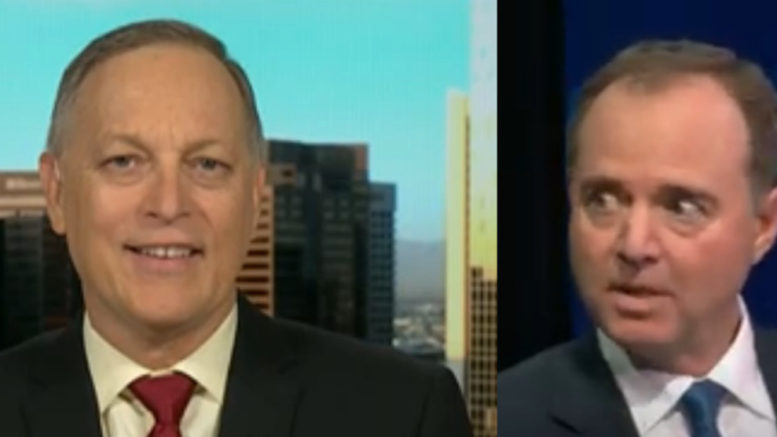 Freedom Caucus Chairman, Andy Biggs (R-AZ) spoke with host Sandra Smith on Fox News’ “America’s Newsroom” Monday ahead of the House holding a vote later in the day, to condemn and censure House Intel Chairman, Adam Schiff (D-CA). There are currently 173 Republicans that back the motion to censure Adam Schiff.

Biggs introduced a resolution after Schiff was caught lying about details of the “so-called whistleblower” and also made up a conversation between President Trump and Ukrainian President Zelensky, during a congressional hearing where he called it a “parody”.

“What you’re gonna see is tonight, we’re gonna have this censure motion go forward on a vote, then the rest of the week there’s a number of hearings scheduled, that are closed door, behind this continuation of this ‘Stalin-Esque, soviet style impeachment injury,'” Rep. Biggs said describing Congress’ work week.

Asked what is the charge that he’s leading with 173 Republicans on board with his motion to censure Schiff, Biggs said, “It’s two things: We want to make sure that the American people understand what Adam Schiff is doing. It’s not the normal way that you conduct an impeachment inquiry, if this were an impeachment inquiry.”

“The second thing is it lets Mr. Schiff know himself, how disappointed we are. And thirdly, I would say, it gives the Democrats an opportunity to show the Amerian people where they are on due process. And they get to say, ‘Look, we’re perfectly content with a closed-door impeachment inquiry’, or they get to say, ‘This isn’t quite right, we’d like to do this the right way,'” he added.

The Freedom Caucus Chairman also said the motion is “filled with a lot of symbolism, but has the harsh reality to is as well.” (Continued Below)

Last week, Adam Schiff tweeted, “Here are the actual facts: Republican Members and their counsel are present for all committee depositions and hearings and have the same opportunity to ask questions of all the witnesses as the Majority. And rest assured, the public will learn the facts.”

Rep. Biggs responded to Schiff’s tweet and said, “If this were formalized, the impeachment inquiry, the President would have his council there, they’d be able to bring in witnesses. The minority, us, the Republicans, would be able to bring in witnesses. This would be open door transparency– you could watch it real-time. Part of what happens in this type of setting normally, the whole American people get to judge the veracity or credibility of witnesses. We’re being denied all of that. We can’t even get the transcripts.”

“So when he says we’re gonna see it ultimately, who’s gonna be the filter through which we see that?” the Arizona Congressman asked. “It’s gonna be Adam Schiff, and he’s prevented me and many of my colleagues who’ve asked for copies of transcripts, and we just don’t get them. This is being channelized, he’s being able to control everything about this, instead of letting the American people see what’s happening.” (Continued Below)

Rep. Biggs also said that Schiff has “tainted the well”, because he was the guy who said for two years that there was “absolute, clear evidence of collusion” between the Trump campaign and Russia, and it turned out that was not true.

Biggs concluded, “I think what’s important for the American people to understand is you’re gonna see my motion go straight up, but the Democrats are gonna run a procedural move to try to keep us from having a straight up vote. So, it’s gonna look a little upsidedown, but a ‘no vote’ means you want censure, and a ‘yes vote’ means you want to avoid having a vote on the censure.” [Emphasis added] (Video Below)

We are calling up a resolution that condemns Chairman Adam Schiff and the way he has abused his power to mislead the American people. Read the complete censure resolution here: pic.twitter.com/sLDazCXRMz

(Related: Before Voting, Rep. McCarthy Unveils Why The House Should Censure Schiff: ‘[He] Used His Position To Mislead The American People’)